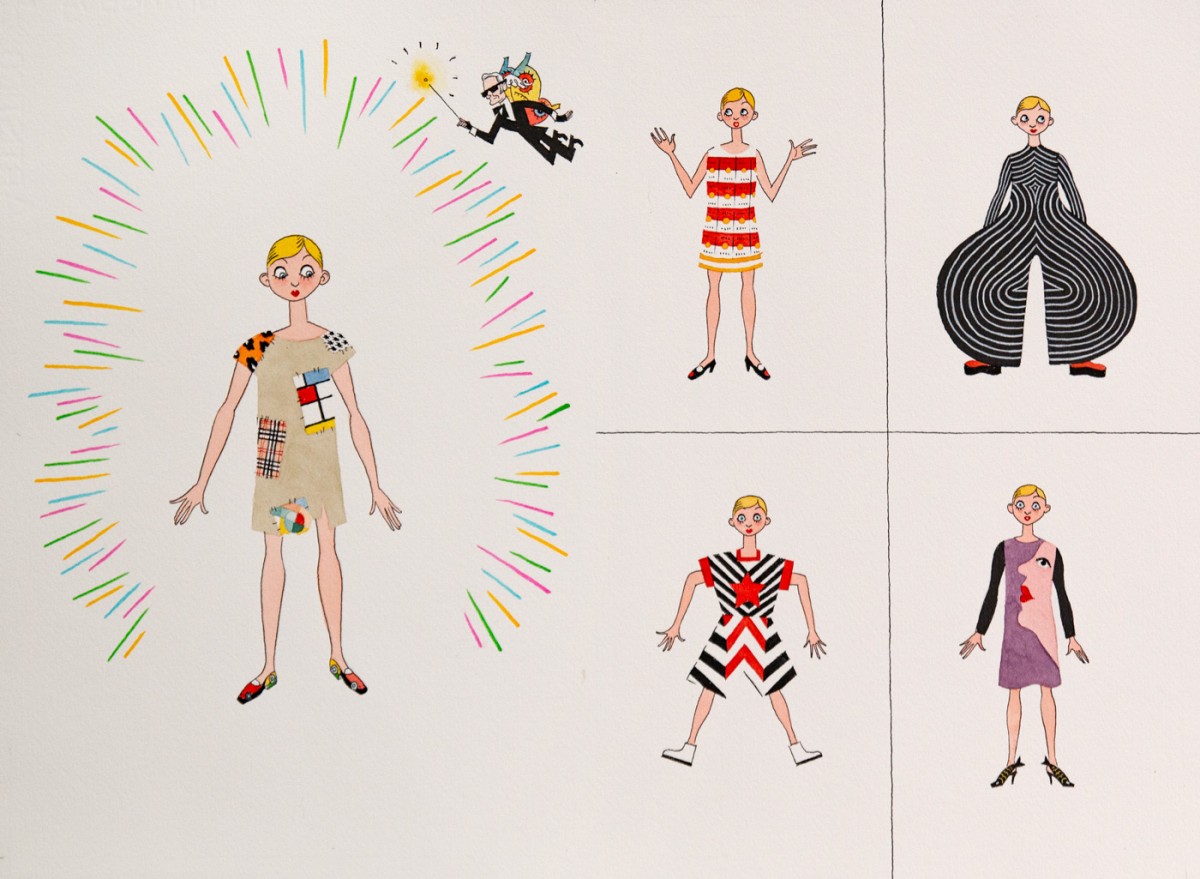 Steven Guarnaccia (b. 1953), At last she chose one, and on her feet appeared a pair of crystal slippers, 2013, Ink and watercolor.&nbsp;Collection of the artist.&nbsp;Illustration for&nbsp;Cinderella, A Fashionable Tale&nbsp;by Steven Guarnaccia (Abrams Books for Young Readers, 2013) 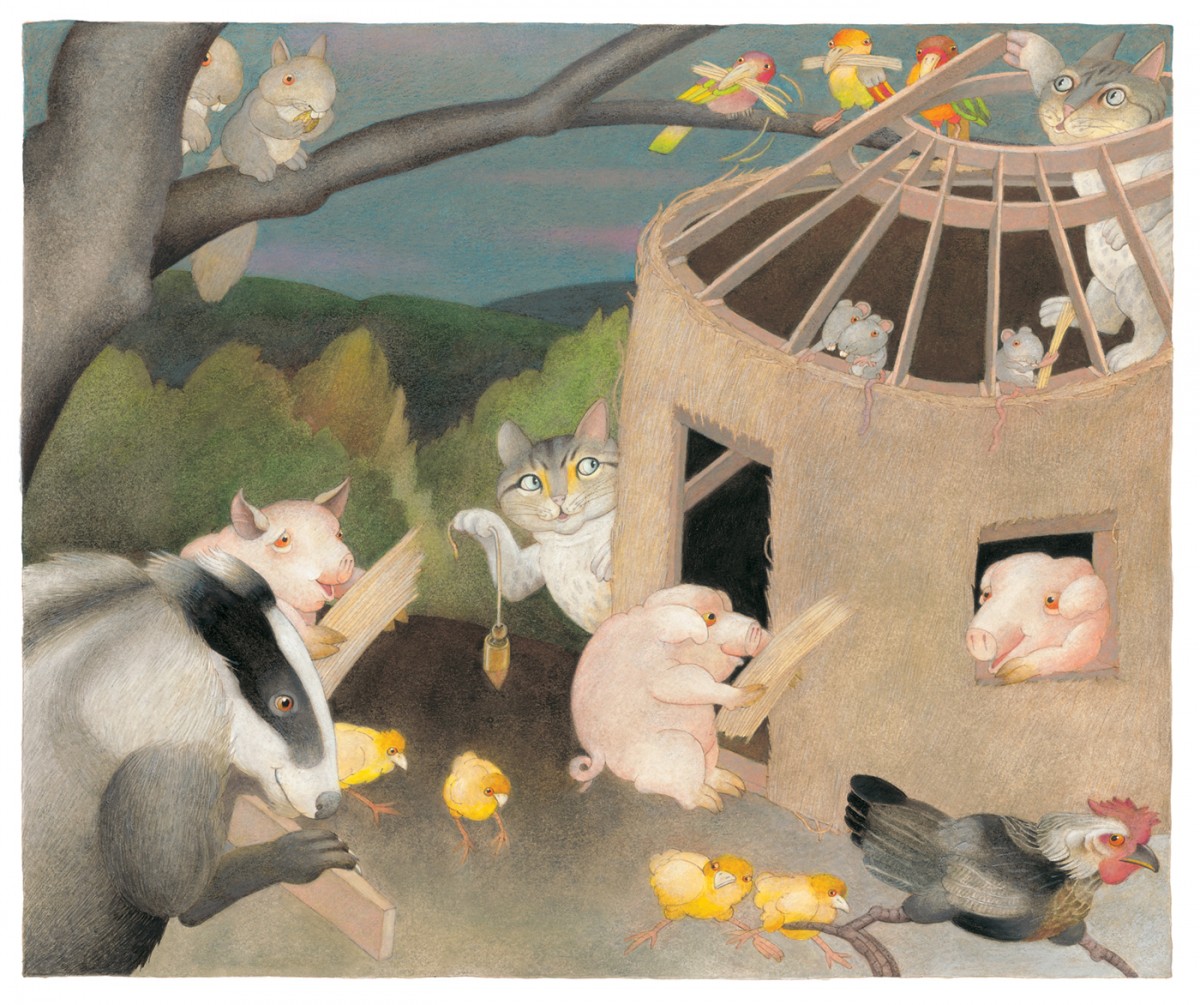 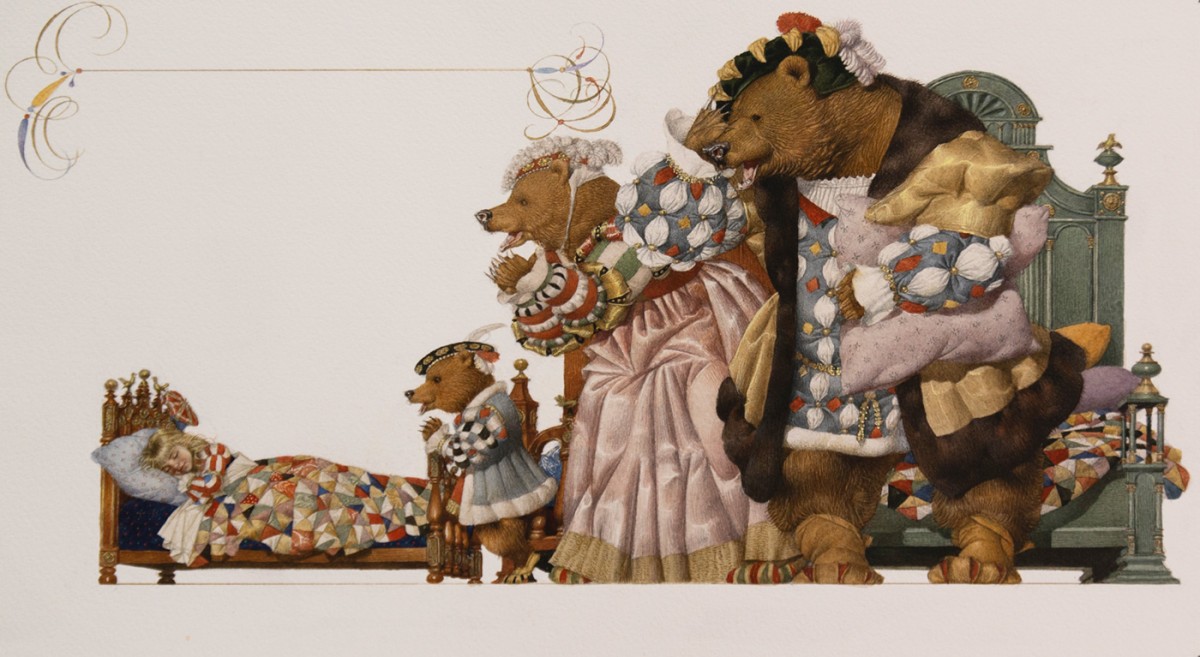 Gennady Spirin (b. 1948), “Who’s been sleeping in my bed,” says Papa Bear, 2009, Watercolor on paper, Collection of the artist.&nbsp;Illustration&nbsp;for Goldilocks and the Three Bears by Gennady Spirin (Two Lions, 2009) 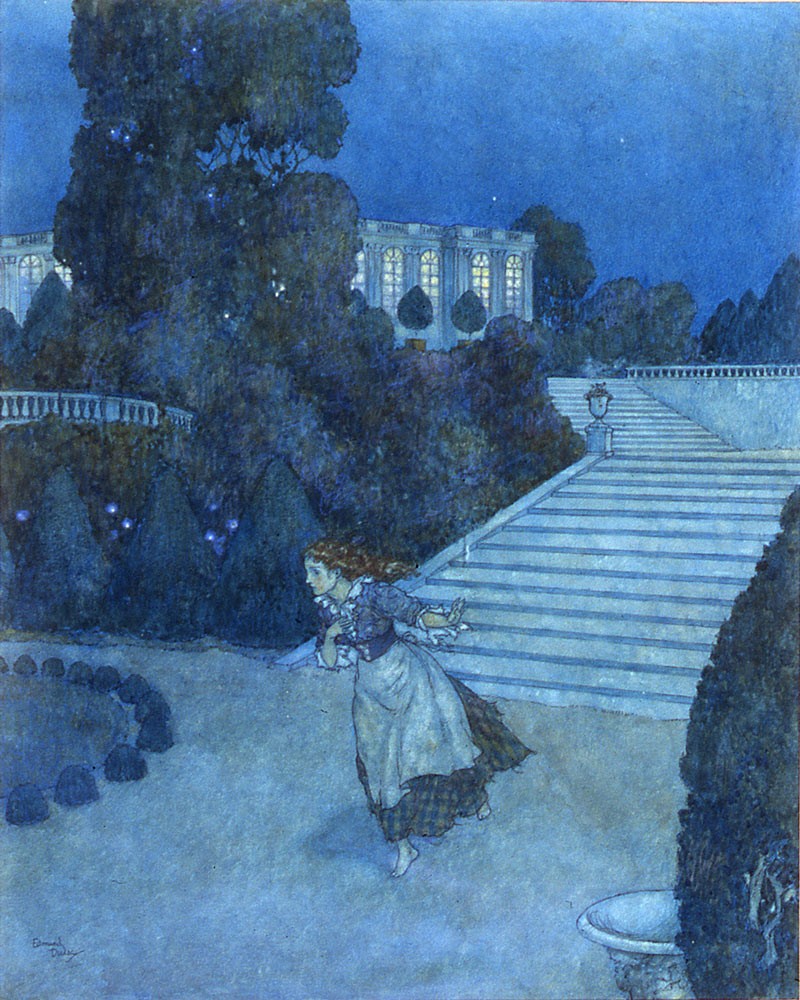 Edmund Dulac (1882-1953), She made her escape as lightly as a deer, ca. 1910.&nbsp;Watercolor on paper, Kendra and Allan Daniel Collection. Illustration for The Sleeping Beauty, and other Fairy Tales from the Old French, retold by Sir Arthur Quiller-Couch (Hodder and Stoughton, ca. 1910) 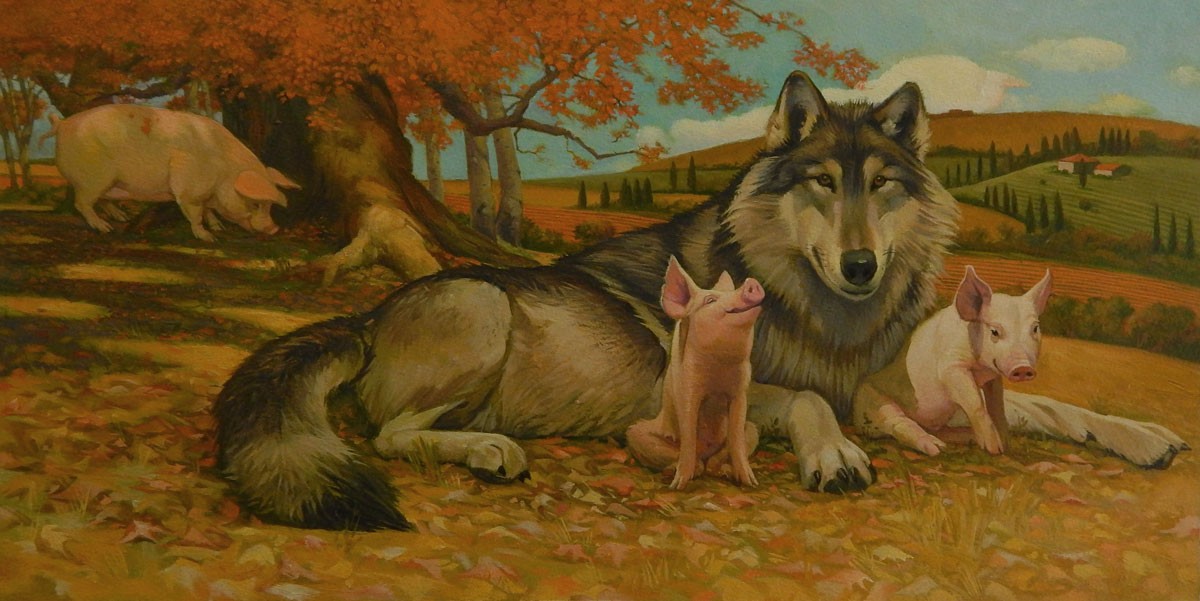 Charles Santore (1935-2019), “From that moment on, the three pigs and the wolf spent their days together.” Oil on watercolor paper, image size: 18 1/4 x 9 1/8 in. Collection of the Santore family.&nbsp;Illustration for Three Hungry Pigs and the Wolf Who Came to Dinner by Charles Santore (Random House Children’s Books, 2005) 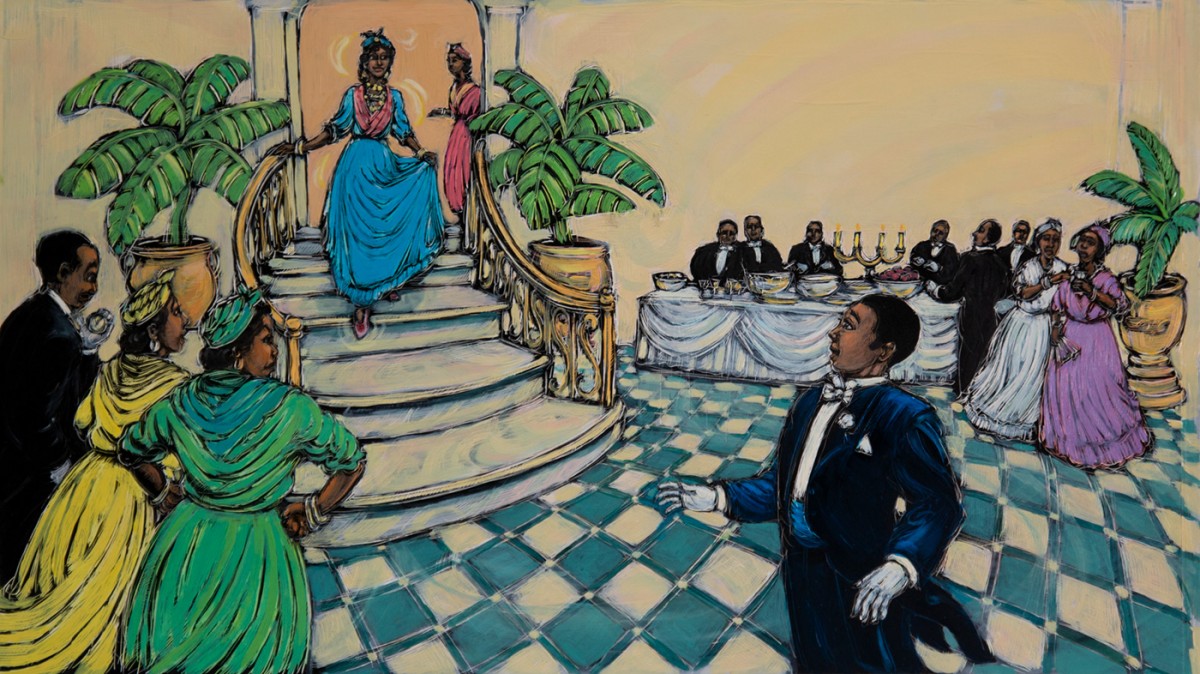 Brian Pinkney (b. 1961), What a grand entrance Cendrillon made!, 1998, oil on scratchboard. Collection of the artist.&nbsp;Illustration for Cendrillon, A Caribbean Cinderella by Robert D. San Souci (Simon and Schuster Books for Young Readers, 1998) 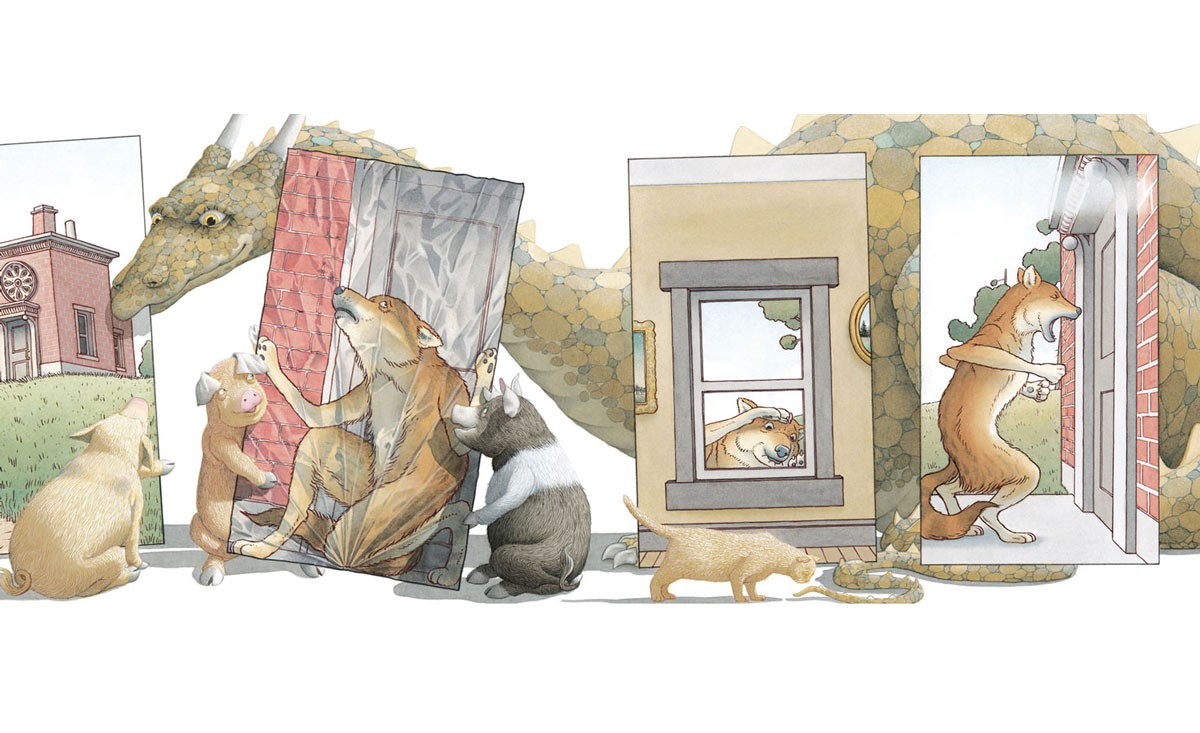 Fairy tales are age-old stories that teach life lessons, touch on dark fears and elemental truths, and seed nascent imaginations. The universality of their appeal has inspired illustrators for centuries.

From October 5, 2019 through January 5, 2020, the Brandywine River Museum of Art presented Cinderella & Co.: Three Fairy Tales Reimagined, an examination of illustrations for three well-known and beloved fairy tales—Cinderella, Goldilocks and the Three Bears, and The Three Little Pigs. The exhibition is organized by the Brandywine River Museum of Art, which was the exclusive venue.

For this exhibition, guest curator H. Nichols B. Clark, Founding Director and Chief Curator of the Eric Carle Museum of Picture Book Art Emeritus, has deflected textual considerations and focused on the broad array of imagery; the central premise is to consider the three tales and upend the status quo of traditional depictions. The work of nineteenth and early twentieth-century masters such as Walter Crane, and L. Leslie Brooke will provide examples of classic styles and interpretations that influenced numerous traditional artists such as Marcia Brown, Paul Galdone, Barbara McClintock, and Jerry Pinkney. These orthodox images will be juxtaposed with unconventional interpretations, such as the more experimental and edgy visions exemplified by the art of Etienne Delessert, Steven Guarnaccia, Lane Smith, William Wegman, David Wiesner, and Mo Willems.

Illustrations, explored as signifiers of time and culture, reveal the extraordinary versatility inherent in the stories. Rich multicultural readings, such as those from China (Ed Young), the Spice Islands of Indonesia (Reynold Ruffins), the Caribbean (Brian Pinkney), Russia (Anita Lobel), and Mexico (Tomie dePaola) underscore the notion that these treasured stories live visually in many different forms and lend themselves to surprisingly diverse interpretation.

Cinderella & Co.—Three Fairy Tales Reimagined is made possible by the generosity of Otto’s BMW & Mini.