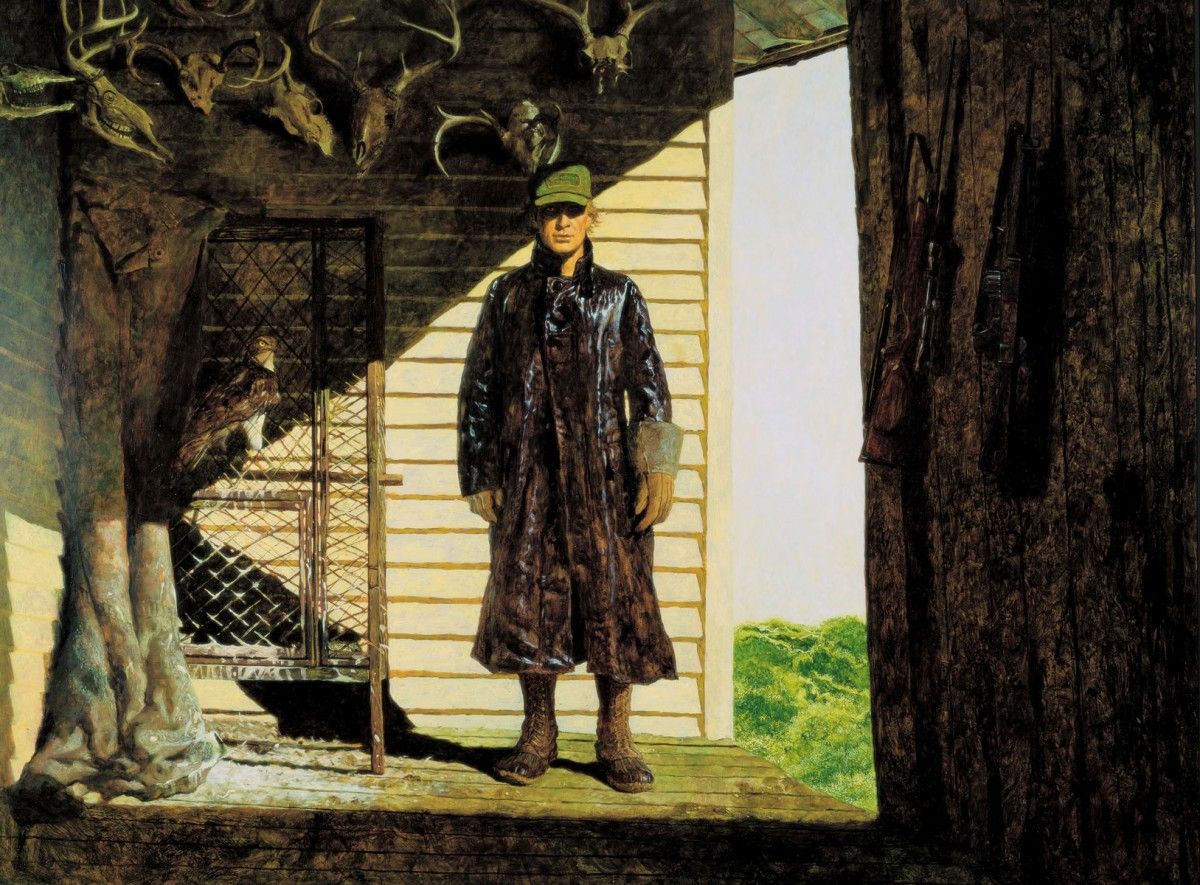 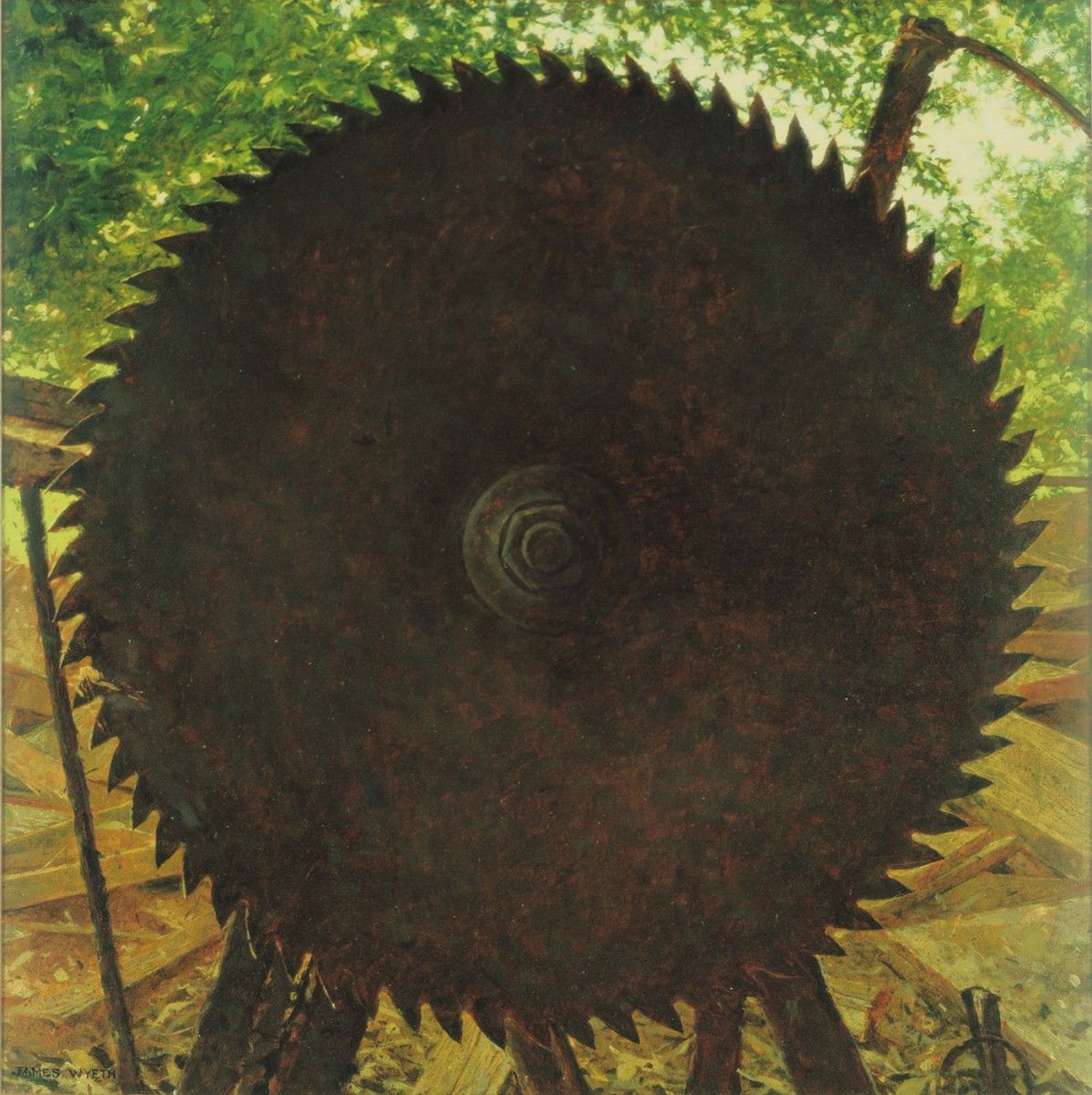 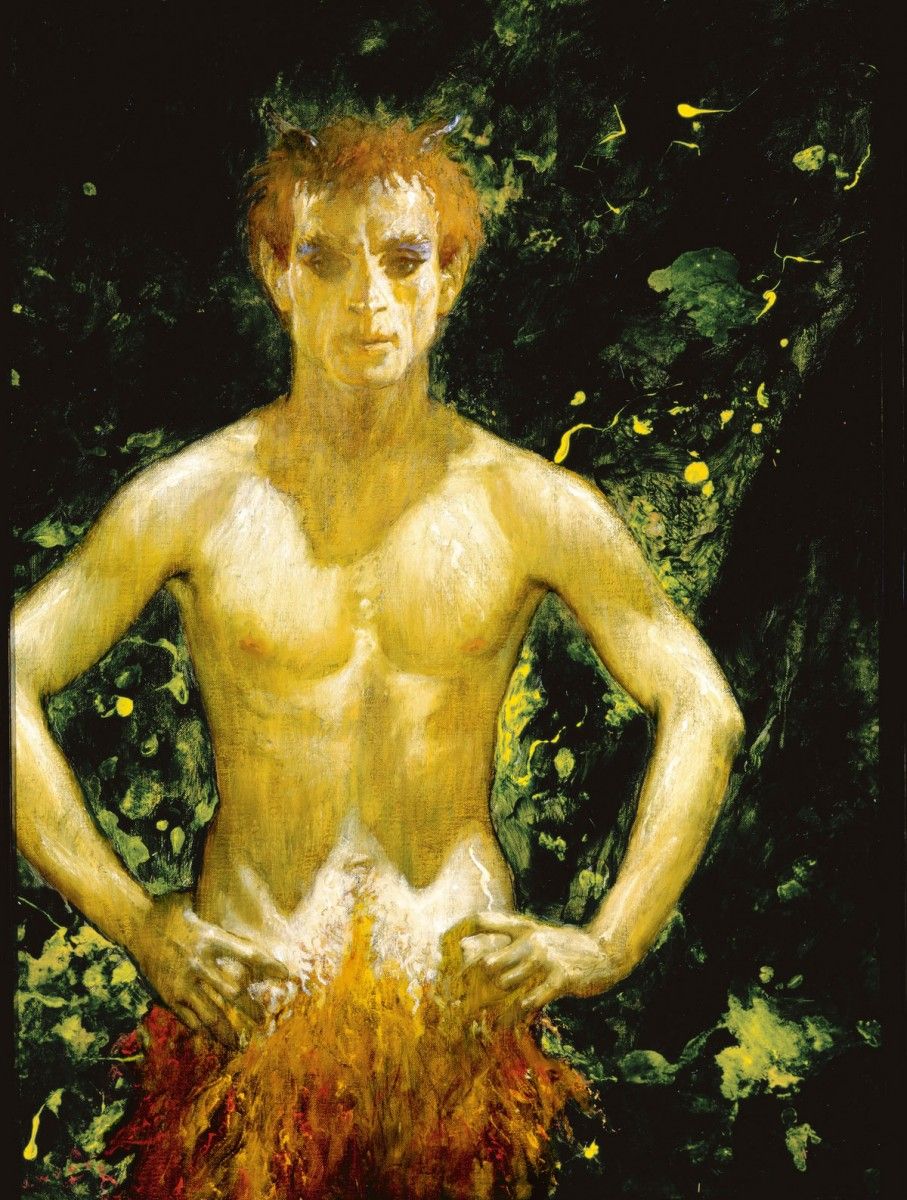 Jamie Wyeth (b. 1946), The Faune, 1977/2002, oil on canvas, 36 x 26 in. Brandywine River Museum of Art. Purchase made possible by the Robert J. Kleberg, Jr. and Helen C. Kleberg Foundation; the Roemer Foundation; the Margaret Dorrance Strawbridge Foundation of PA I, Inc.; and an anonymous donor, 2006 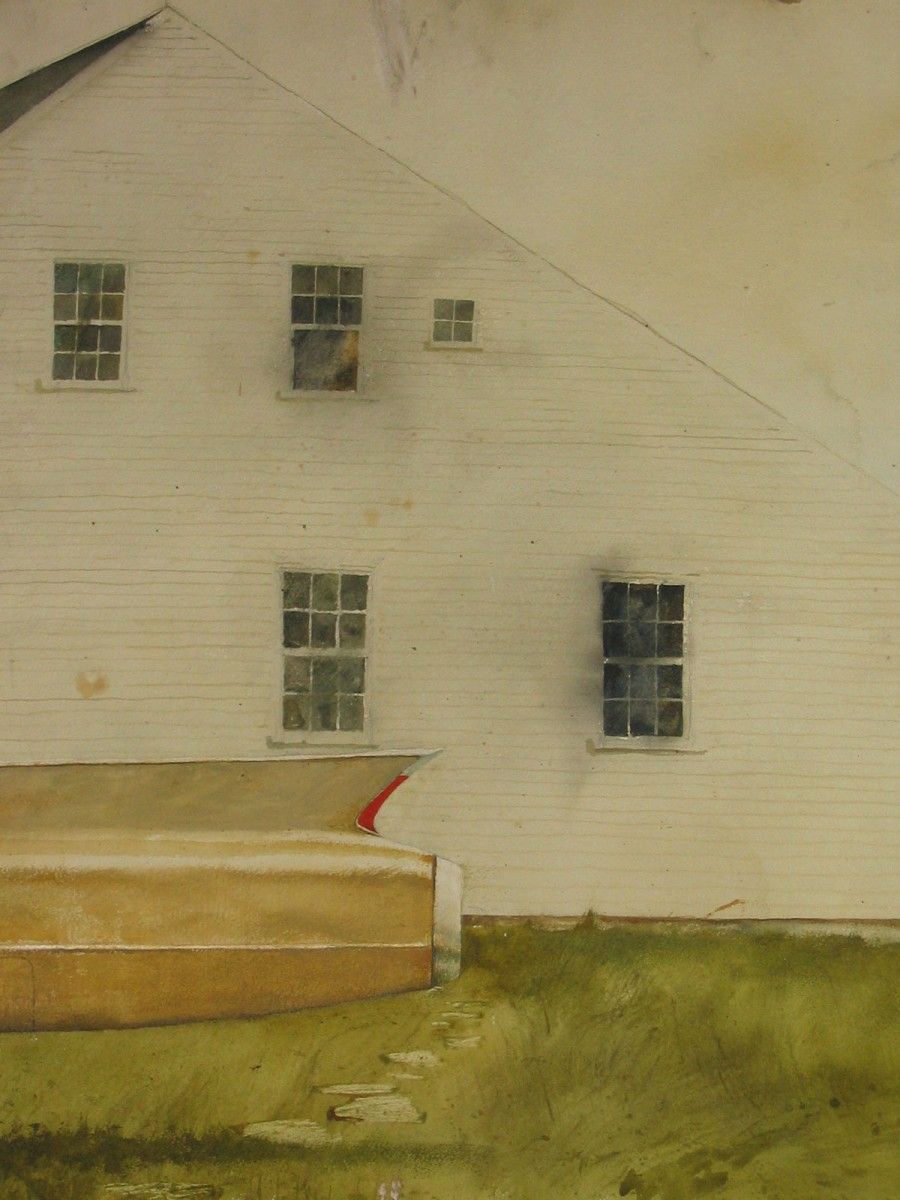 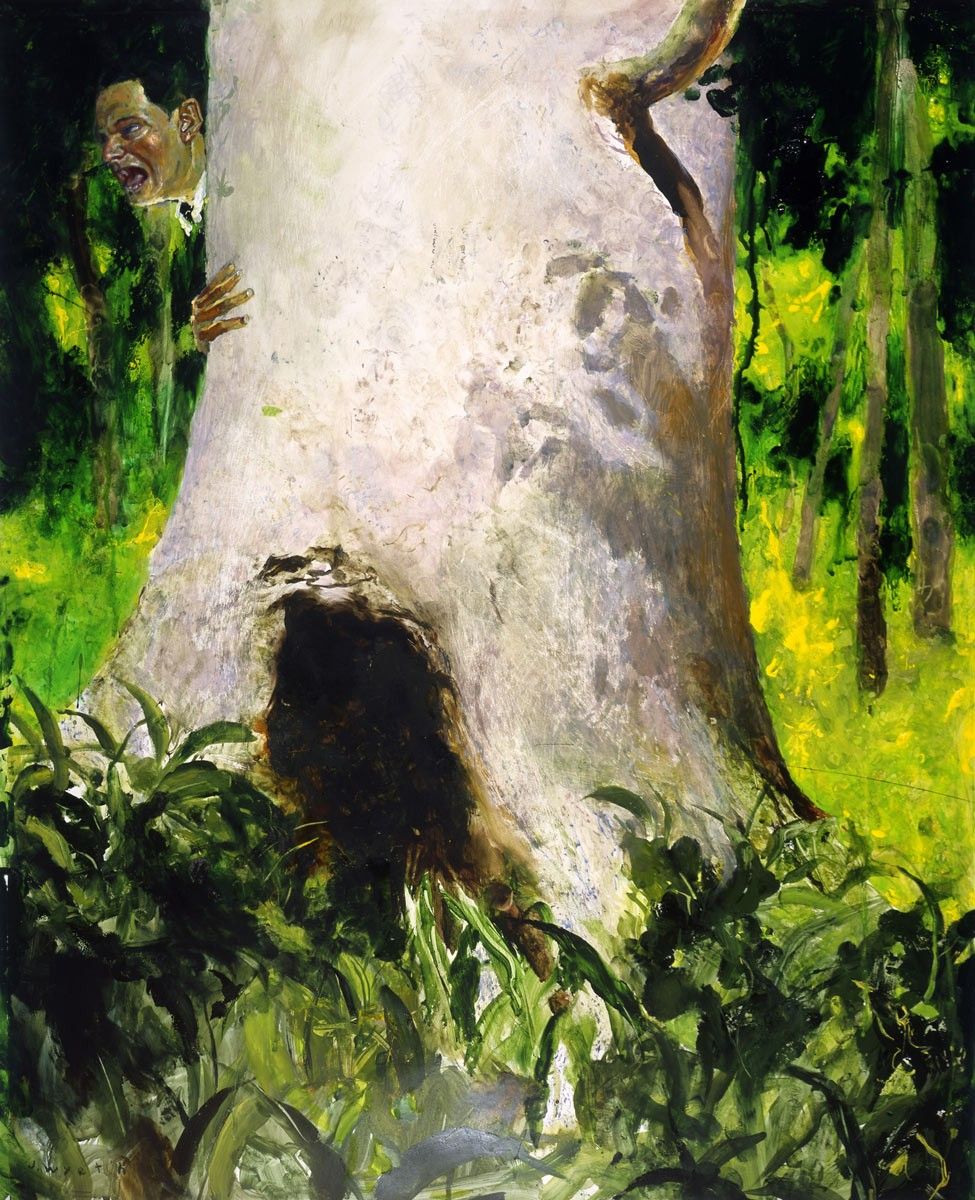 This exhibition traces a persistent vein of intriguing, often disconcerting imagery over the career of renowned artist Jamie Wyeth (b. 1946). Frequently countered and even hidden by Wyeth’s fuller body of work—particularly his immensely popular coastal views, farmscapes, and other illustration work—the darker and more troubling imagery is constant in his oeuvre. Whether he is introducing curious characters or surveying strange landscapes, Wyeth is at home with uneasy subjects and a master of the unsettled mood.

Born into the third generation of one of America’s most renowned artistic families, Jamie Wyeth grew up surrounded by creativity. He trained with his aunt Carolyn Wyeth in the studio of his grandfather, distinguished illustrator N. C. Wyeth. Like his father, American realist painter Andrew Wyeth, and grandfather before him, Jamie Wyeth splits his time between the Brandywine River Valley of Pennsylvania and Delaware and the Mid-coast of Maine. In these two locales Wyeth passed through many “obsessions,” as he calls his favored subjects. His style developed from the strict and meticulous realism of his teenage years to a more expressionistic variation, with day-glo colors, mixed media techniques, and freer brushwork today. A chilling thread runs through his work from the last 60 years, present but not overwhelming, and ever-evolving with his style and subjects.

While many artists have found the beauty in everyday objects, Wyeth is adept at finding the anxiety in them. Early works of common tools such as The Axe (1964), Tractor (1966), and Buzz Saw (1969) create instant visions of the solitary, laborious lives of the men who used them and the violence these tools might conduct. The haunting absence of humans is further emphasized in the many paintings of hollow places, including Barn Door, Broad Cove Farmhay (n.d.), Hudson House (1978), and Gull and Windsor (1993). Even the natural world transmutes into a disconcerting version of itself in River Trunk (1968), Berg (2011), and My Mother and the Squall (2016).

Perhaps Wyeth’s strongest means of evoking mood is with the straightforward presentation of eccentric portraits. The subjects in Bean Boots (1985), Light Station (1992), and The Bones of a Whale (2006) all conjure, with Wyeth’s keen eye for the outward signs of inner peculiarities, strikingly strong character, if unnerving, studies. Even more disturbing than some of the people met in Wyeth’s paintings are the figures left partially hidden, which lend works like Record Player (1964), Channel 12 (1992), and Other Voices (1995) an added air of mystery and perhaps peril.

This aspect of Wyeth’s work has had moments of greater exposure over the decades. In his Suite of Untoward Occurrences on Monhegan Island (ca. 2012-2017) each work in the series rolls out a tantalizing but ominous partial narrative of the lore of this isolated island, leaving the viewer to imagine the outcomes and meanings. Wyeth’s “Seven Deadly Sins” series (2007) and his concurrent gull studies reveal the cruel and vicious nature of the birds, a subject that preoccupied the artist for many years. Ravens and crows join the gulls in such works as Bird Church (1989), Rudolf Hess and the Raven (1995), and Carney Gulls #3 (2009) as Wyeth explores an almost Hitchcockian fixation with them. In recent works such as the his “Screen Door Sequence,” Wyeth goes beyond the canvas to create haunting three-dimensional works in which he incorporates found objects and blurs the line between painting and sculpture.

Among the goals of this examination of Wyeth’s work is the intentional disentanglement of his work from that of other family members. Looking at Wyeth’s work in isolation may still suggest affinities with the darker work by other generations of his family or other artistic influences, but it does not form the starting point of the investigation. Not intended as a retrospective, this exhibition will follow the development of Wyeth’s skillful, cinematic shorthand that has the power to send an instant shiver down the spines of his audience. A focused look at Wyeth’s arresting, visceral, and unsettling imagery will provide fascinating insight into the artist and the art of visual storytelling. Fiercely independent in the face of prevailing art world trends, Jamie Wyeth stands apart in a shadowy and strange world of his own creation.

The exhibition will be accompanied by a major catalogue published by Rizzoli Electa, with a lead essay by Amanda C. Burdan, Curator at the Brandywine River Museum of Art and organizer of this exhibition Other authors will explore the creation of similarly unsettling moods in different media, including essays by John Rusk on filmmaking, Rena Butler on choreography, Michael Kiley on sound artistry, and Jennifer Margaret Barker on classical composition.