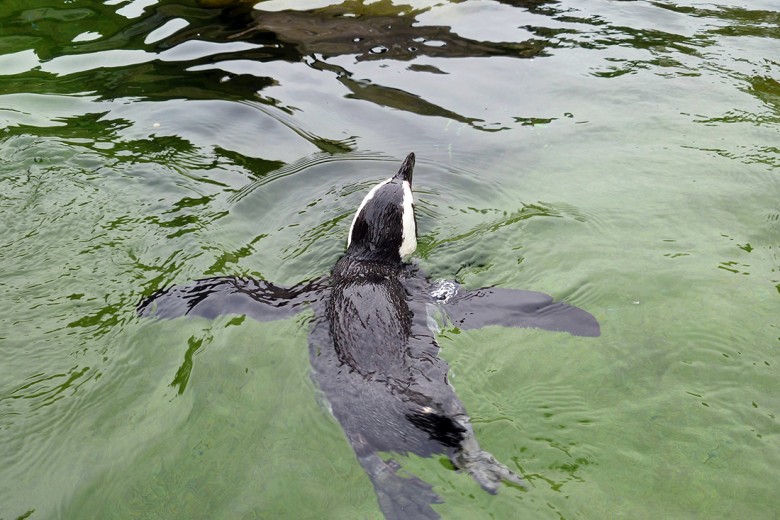 Did you know the Brandywine Conservancy's Penguin Court Preserve was originally named for the 10 African penguins that roamed the former estate home in the mid-1900s? To celebrate World Penguin Day, let’s learn more about African penguins!

After his passing in 2014, Richard M. Scaife bequeathed his family’s country estate in Laughlintown, Pennsylvania—dubbed Penguin Court—to the Brandywine Conservancy. It was Scaife’s parents, Alan and Sarah, who had the estate built in the late 1930s as a second home. Sarah had a special fondness for penguins, and in addition to the 10 distinctive birds who called the estate home, the penguin motif was also incorporated into paintings, embroidered on towels, and displayed with statues.A home video confirmed the species of penguins at the property as African penguins (Spheniscus demersus), which are also called black-footed penguins, Cape penguins, or even—forgive me—jackass penguins for the braying sound they make! Click here to listen.1

African penguins live along the southern coast of Africa and are not found in the extremely cold temperatures of Antarctica. Growing to a height of 2-2.75 feet, they only weigh between four and eleven pounds with the males being a little larger than the females. The latter typically lay two eggs, which are incubated by both “mom” and “dad” for about 40 days, often in a nest of guano, since the rocky shores offer little else for nesting materials. The babies fledge when they are four months old and are not considered mature until they are about four years old.2  Most African penguins are monogamous, and they live 10-20 years in the wild.

African penguins are recognized by the black rainbow across their white chest and the pale pink, featherless patch around their eyes. This is actually a gland that helps the penguin thermoregulate its body temperature. When the penguin is hot, it sends more blood to this area to be cooled by the air, causing the patch to turn bright pink, whereas, if the penguin is cold, blood is kept away from the patch, making it appear light pink or whitish.

Just as humans have unique fingerprints, African penguins have black flecks on their chest that distinguish them from each other. The white color of their belly, which helps them blend in with the light sky when seen by predators below in the water, extends in a “C” shape up around their eyes. Their black backs camouflage them against the dark ocean when seen from above.

According to Encyclopedia Britannica online, in the water, African penguins may fall prey to seals and sharks, whereas on land, they must watch out for mongooses, leopards—yes, you read that right—and even feral cats and dogs. The chicks are especially vulnerable to such prey as the kelp gull, sacred ibis, snakes and rats.3 African penguins find their meals in the ocean, dining on anchovies, sardines, mackerel, and the occasional squid or crustacean. When hunting, African penguins can swim up to 12 mph, and their average dive is 2.5 minutes and nearly 100 feet deep! 4

Sadly, African penguin populations are dramatically declining, as they are threatened by climate change, illegal trade, oil pollution and commercial fishing. The International Union for Conservation of Nature (IUCN) lists African penguins as “Endangered” on its “Red List of Threatened Species” and notes that their population continues to decline with just approximately 41,700 mature individuals in 2015. Researchers and educators are monitoring African penguins, promoting conservation measures, and sharing awareness to protect these beautiful birds.5