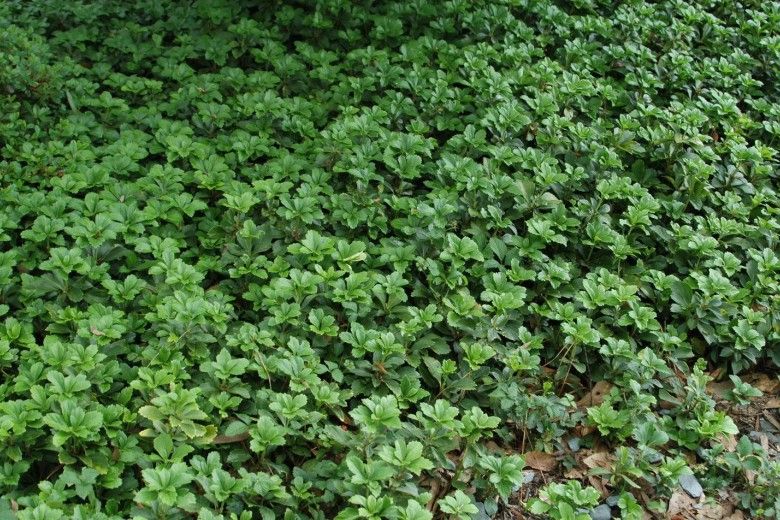 Japanese pachysandra is a popular landscaping plant chosen by homeowners as a ground cover for hard-to-grow, shaded areas and areas with poor soils. The problem? This plant has no boundaries and doesn’t know when to stop. Pachysandra terminalis is a hardy perennial that spreads to form dense mats of groundcover. Japanese pachysandra can quickly overrun the intended garden boundaries, escaping into the natural landscape and outcompeting native plants.

A member of the boxwood family, Japanese pachysandra is an evergreen perennial. This shrubby plant only reaches about a foot in height with oval serrated leaves, 2-4 inches long. In early spring 1-2 inch white flower spikes will bloom, though not particularly showy. During the coldest months, the leaves may become slightly yellow to brown.

The same characteristics that make Japanese pachysandra a foolproof groundcover choice are also what makes it a threat tosurrounding native landscapes. Japanese pachysandra spreads by underground stems called rhizomes. Plants that spread by rhizomes are notoriously aggressive. For example, if a plant is removed that spreads by rhizomes, any piece of the rhizome left behind can grow into a new plant. Japanese Pachysandra’s tolerance for difficult growing conditions also makes this species a serious threat. Without active management of the designated planted area, Japanese pachysandra can quickly become out of control and spread to unintended areas. This tenacious species ability to thrive, in even difficult conditions, allows Japanese pachysandra to outcompete native species for crucial resources such as nutrients and light.

Japanese pachysandra can be difficult to eradicate once established. Both mechanical and chemical removal are good options for controlling this species. While tedious, digging the plant up by hand can be an effective method of removal for small areas. It is important to be sure to remove all portions of the underground rhizomes to minimize the amount of regrowth. For larger areas, herbicide is likely the best option for control. A broad-spectrum systemic herbicide such as glyphosate should be used. A 2% solution mixed with a surfactant on the leaves of the plant during the fall works best. It is important to carefully read the herbicide label, and follow all instructions and requirements for safe use. If you do not wish to remove the Japanese pachysandra in your landscape, it is important to contain and manage it to ensure that it does not spread to natural areas.

Many species native to our area canserve as great alternative groundcover options. Partridgeberry (Mitchella repen) is a perennial herb that grows well in shady, woodland environments. This species growsbright red berries that are a great food source for wildlife during winter months.

For wetter soils, try wild ginger (Asarum canadense L.). Wild ginger has heart shaped leaves with a peculiar flower at the base of the plant. Another great evergreen alternative is striped wintergreen (Chimaphila maculate). Striped wintergreen prefers partial sun to medium shade with dryer conditions. A few other suggestions are Christmas fern (Polystichum acrostichoides), wild leek (Allium tricoccum) and Pennsylvania sedge (Carex pensylvanica). By choosing a native alternative for Japanese pachysandra we can help to improve the ecological value of our surrounding landscape.

Leaves that won't get lost