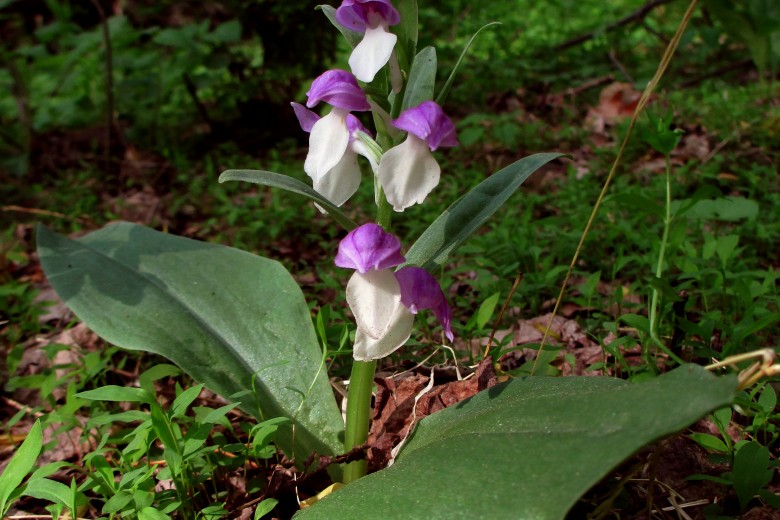 Orchids are beautiful, striking, colorful and fragrant. They’re found in flower arrangements, at florist shops and in Longwood Gardens’ annual Orchid Extravaganza! But did you know that orchids can also be found in our region’s natural areas?

There are over 28,000 orchid species worldwide—that’s 10% of the planet’s flowering species. Orchids grow on every continent, except Antarctica; most are tropical residents. About 70% of the world’s orchids are epiphytes: they grow on trees and other plants, their roots floating in air. These are the most common orchids in cultivation. But in our region—the Piedmont of Delaware and southeast Pennsylvania—orchids are terrestrial, growing in soil.

North America is home to over 200 orchid species. In Chester and Delaware counties, there are 31 native orchids. In Piedmont Delaware, there are 16 species. While many are uncommon, some of these locally present orchids are common in their favored habitats, if those places are healthy and protected from deer and invasive species. Indeed the presence of native orchids in an ecosystem is an excellent indicator of the health of that habitat.

Orchids are among the world’s oldest flowering plants: they evolved over 90 million years ago in Australia and spread widely before the continents drifted apart. The earliest orchid fossil yet discovered is over 45 million years old: a pollen grain on the leg of a fungus gnat that was trapped in amber. Over time, orchids have evolved into so many varieties as they adapted to specialize for habitat, pollinator species and symbiotic fungi.

How can you recognize an orchid? While orchid flowers vary in size, color and form, all have the same basic shape and components. There are three sepals (which may look like petals) and three petals, arranged in a whorl. One of the three petals is in the form of a lip. The male and female reproductive organs are fused into a single tubular structure called a “column.”

The lip and column are essential to how the orchid is pollinated. The lip is both an enticement and a landing pad to a foraging insect. The insect will brush against the column, depositing any pollen that it’s carrying, thereby starting the reproductive process.

That process of reproduction is another of orchids’ unique features. After successful pollination, the flower produces tiny, dust-like seeds that contain no nutrition for the developing embryo. To provide carbon and other essential elements, orchids have evolved a symbiotic relationship with fungi—an association that is referred to as mycorrhizae. These fungi live inside the orchid’s roots and provide nutrients to the developing seed (called a protocorm), for months or even years, even after it emerges aboveground as a seedling. Mature orchids also digest the fungi within their roots to obtain nourishment.

This unique orchid-fungus association makes propagating and cultivating wild orchids difficult. Without the specific fungus in the soil that the orchid needs, its seeds will not mature.

Orchids in the Wild

Knowing how complicated the lifecycle of orchids is, it is that much more wonderful to come across a native orchid in the wild. While none of our native orchids is frequently encountered, there are some that are more likely to be seen. The downy rattlesnake plantain (Goodyera pubescens), found in woodlands, is relatively common and is easily identifiable in all seasons by its evergreen leaves: dark green and veined with silvery-white. In summer a stalk of small white flowers appears. Another common orchid is much easier to miss. Called “small green woodland orchid” or “clubspur orchid,” Platanthera clavellata is only a few inches tall. It grows in bogs, swampy areas and wet woods. A stalk of very small yellow-green flowers appears in summer.

The Showy Orchid (Galearis spectabilis) has two large basal leaves and large distinctive flowers with a prominent spurred white lip and bright pink or purple petals that curl above the lip. The name “Galearis” refers to the “helmet” shape of the flower. Showy Orchid, which blooms in early spring, is found in rich deciduous woods and slopes, often in moist areas. While it’s an uncommon find in Piedmont Delaware, this orchid is not unusual in southeastern Pennsylvania, in appropriate habitat.

The pink lady’s slipper, Cyprypedium acaule, is easily recognized by its single, bulbous pink flower. It is found in acidic woodlands. The flower is pollinated by bumblebees in spring; attracted by its scent, they become trapped and are forced to exit the back of the flower with no nectar reward. This reproductive strategy teaches the bumblebees to avoid the next lady’s slipper! Accordingly, it has a low pollination rate. The orchid is rare in Piedmont Delaware. In southeastern Pennsylvania, while not rare, it is typically found in habitat that is fast disappearing.

The majority of North American orchid species are threatened or endangered. In Chester and Delaware counties, 11 species have—or are proposed to have—rare, threatened or endangered status. In Delaware of the 16 Piedmont orchids, seven have a state status of rare and of conservation concern. The main threats to orchids are habitat loss (due to land use changes, primarily development), competition from invasive species, deer depredation and plant collecting. For example, the rare Puttyroot (Aplectrium hyemale), grows on rich wooded slopes. It has a single large leaf that stays green through the winter. In spring, after the leaf dies, it produces a stalk of small, white-purple flowers. The orchid is found only in small scattered populations. This image shows a leaf after it has been browsed by deer.

Another rare woodland orchid recognized by its winter-present leaf is the Cranefly orchid (Tipularia discolor). As suggested by its scientific name, the leaf’s two sides have different colors: the top is green and the underside is purple. Like the puttyroot, the orchid flowers in spring as its leaf dies. It is pollinated by moths, not by craneflies.

The precarious status of many of our native orchids is leading to innovative conservation efforts. The North American Orchid Conservation Center (NAOCC) was established by the Smithsonian Institution and the U.S. Botanic Garden to preserve orchid habitats, create and maintain national collections of seeds and orchid mycorrhizal fungi, and support scientific research and public awareness. The NAOCC’s “GoOrchids” website is a great resource for anyone who wants to learn more about native orchids.

Organizations in our region are working to protect and conserve native orchids. Because of their dependence on mycorrhizal fungi, our rare native orchids resist transplanting and do not reproduce well in cultivation. These characteristics present a challenge to plant conservation. Applying advanced laboratory methods such as tissue culture, Longwood Gardens is working to propagate the rare yellow lady’s slipper(Cypripedium parviflorum var. pubescens). The project uses seeds and tissue samples collected from flowers in local habitats, including some found on Brandywine Conservancy’s preserved lands.

Mt. Cuba Center is working to identify locations where rare orchids grow in Delaware.In addition to adding to our knowledge of the status of these plants, the effort assists propagation. Mt. Cuba collects tissue samples and seeds, which are shared with organizations such as the NAOCC.

How to Get Involved

What can you do? Look for native orchids! To help identify your finds and learn more about the plants, use GoOrchids or state botany resources, such as The Pennsylvania Flora Project or Flora of Delaware. You may report rare finds in Pennsylvania to the Pennsylvania Natural Heritage Program and in Delaware to Bill McAvoy, the state botanist. On your property, adopt conservation measures to protect habitat: remove invasive plants that can outcompete the orchids; fence out deer; protect orchids from trampling by people, dogs, horses or livestock. There may be funding available for protection of orchids on your property. Pennsylvania Plant Conservation Network initiated a grant program in 2019 to assist in protecting rare plants on privately owned land.