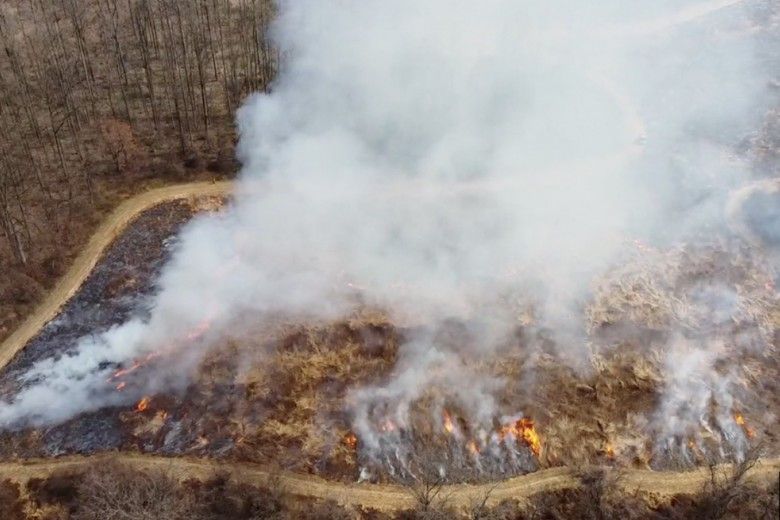 A prescribed fire is a beautiful thing.

When Jim Moore, an owner of one of Brandywine’s conservation easement properties, shared some drone footage of a prescribed burn—a fire that was deliberately set and professionally controlled—we were struck by the beauty of the aerial imagery. Fire, one of nature’s most powerful forces, moves across the land in sinuous lines that could be set to music.

The prescribed burn was done in an 8.4-acre meadow that is part of a large Chester County property, much of which (including the meadow) has been preserved by Brandywine and other entities.

Pictured above is a portion of the fire. This section was designed to burn from the edges to the middle. When the two lines met the fire went out, because there was no more fuel for it to consume. That was no accident. To get a fire to behave precisely the way you want requires planning, experience and strict adherence to process. And land managers will only do a prescribed burn where it can further a conservation objective.

The purpose of this prescribed burn was to encourage native “warm-season” grasses that are important for wildlife habitat and erosion control. These deep-rooted grasses (examples are big bluestem, little bluestem, indiangrass and switchgrass), grow rapidly in summer. In early spring, when the burn occurred, their living parts are dormant below the soil surface. The fire moves very quickly across the ground, with consequently negligible effect on the soil layer. Burning therefore removed competitive above-ground woody plants (primarily blackberry) as well as exotic invasive plants, without negatively affecting the dormant grasses.

Jim Moore, whose family has owned this land for decades, observed, “Warm season grasses benefit from a prescribed burn every three years or so. This field was way overdue by about 15 years!” In Pennsylvania, meadow habitat must be maintained by continual disturbance or it will eventually turn into woods. The field had been maintained by mowing, which kept the blackberry from taking over completely, but left a layer of thatch and duff that actually encourages invasive plants to establish.

The before- and after- images of the same area show the effect of the fire. Before the burn the tan areas indicate last season’s dead plants, including the grasses and invasive plants, and thatch. After the burn the blackened areas show that this dead organic matter was quickly incinerated leaving carbonized material in a thin layer. The fire managers contained the fire to the meadow, leaving the adjacent woodlands untouched.

Not all the blackberry and other woody plants were removed; the brown patches in the post-burn image are plants that did not completely burn because the sap had already started to flow. The field will be mowed in early spring; cutting these fire-stressed plants should be effective to inhibit significant re-growth.

Prescribed burning is an ancient technique of land management. Native Americans who hunted in the woodlands in the mid-Atlantic region set fires to create areas of successional habitat favored by many game species. But European settlement of North America ushered in an era of fire suppression, during which land managers sought to eliminate all fire—whether managed or naturally occurring.

In the last several decades, prescribed fire in our region has been revived. Land managers now recognize that complete fire suppression can damage ecosystems, whereas managed fire benefits plants, wildlife and humans. The more that prescribed fire is used, the more that research into its benefits confirms that it should be used even more. For instance, recent studies found that fire significantly reduces tick populations in the Northeast.

Modern prescribed burning is standards-based, using strict protocols that prioritize safety and restrict the fire to a targeted area. A burn in Pennsylvania must be overseen by a certified “burn boss.” The burn boss prepares a burn plan that, among other things, identifies the weather conditions that will permit a fire.

The burn boss directs a trained crew to ensure the limits of the fire, and to control its direction and intensity. The images above show crew members setting a portion of the fire, and watching the fire carefully to make sure it burns itself out.

Some states have embraced prescribed fire wholeheartedly; Florida burns hundreds of thousands of acres annually. Pennsylvania law has authorized prescribed fire since 2009, but the acreage burned is less than a tenth of Florida’s. The Game Commission and Department of Conservation & Natural Resources have been using fire to improve habitat on public lands. Prescribed fire on private lands has been slower to catch on. A big reason is lack of training and available contractors. Penn State Extension initiated a new program in 2020 to encourage awareness and training.

Another barrier to prescribed fire on private land is expense. For this burn, Jim Moore told us, “The total invoice from [the contractor] was $6000! A cost of $714/acre.” Managers must weigh this consideration with the costs of other management practices. Mowing—which had been the primary management tool—is less expensive, but is also less effective and has long-term environmental costs since it typically uses fossil fuels and emits carbon (a cause of climate change). It also compacts the soil, which inhibits long-term soil health.

Moore hopes to use prescribed burning to address at least one other tough management problem on the property: a 10-acre stand of invasive phragmites that has displaced native plants in a wetland—but that project is subject to funding.

As the meadow regrows this spring and summer, the young grasses will create their own beautiful patterns in the field. We hope to bring you regular visual updates of the “green up” as life returns anew.

For links to more information on prescribed fire—including standards, training opportunities and videos—check out:

The First Blush of Spring