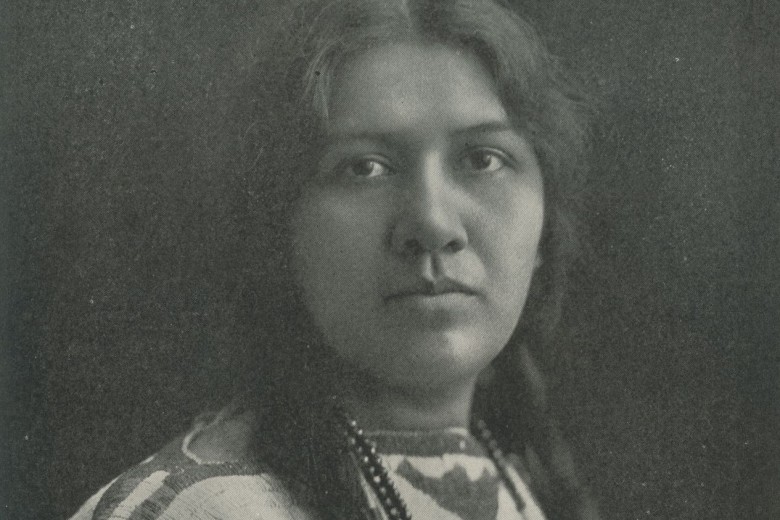 Born in Thurston, Nebraska, in 1871, Hinook-Mahiwi-Kalinaka (as she was also known) was the granddaughter of the Winnebago chief. She was forcibly removed from the Winnebago reservation and enrolled at the Hampton Normal and Agricultural Institute in Virginia as part of the U.S. Government’s program of involuntary cultural assimilation of Indigenous American youth.

In an autobiographical article published in The Red Man magazine in 1911 (Vol. 3, No. 7), De Cora wrote “some of my teachers prevailed upon me not to return home [after graduation] as I was still too young and immature to do much good among my people.” De Cora subsequently traveled to Northampton, Massachusetts, and entered the Burnham Classical School for Girls. From there she enrolled at Smith College to study art under Dwight W. Tryon. “The instruction I received and the influence I gained from Mr. Tryon has left a lasting impression upon me,” she wrote in her article.

“After the four years at Smith College,” she continues, “I went to Drexel Institute, [Philadelphia] Pennsylvania, to study illustration with Howard Pyle, and remained his pupil for over two years.” According to the biography Fire Light: The Life of Angel De Cora, Winnebago Artist by Linda M. Waggoner (University of Oklahoma Press, 2008), De Cora was one of a select few pupils accepted into Howard Pyle’s competitive summer school held at his property in Chadds Ford, Pennsylvania.

Pyle praised De Cora as possessing “not only talent but genius.” He went on to observe that “Of the six compositions she has sent in, every one, if properly painted, with good color and the feeling she shows would make her at once famous. If they were sent to Paris she would at once become notable.”

Still, Pyle felt De Cora faced endemic challenges in enjoying success in that “she was a woman and still more unfortunately an American Indian. She was so retiring she always kept in the background of my classes. When I tried to rouse her ambition by telling her how famous she might become, she answered: ‘We Indian women are taught that modesty is a woman’s chief virtue’” (Waggoner, p. 78-79).

He nevertheless provided her with his contacts at Harper’s and encouraged her to compose her own stories. Following his guidance, she wrote and illustrated the semiautobiographical tales, “The Sick Child” and “Gray Wolf’s Daughter,” for the February and November 1899 issues of Harper’s Monthly.

In the summer of 1898, while under Pyle’s tutelage in Chadds Ford, De Cora produced the oil painting Lafayette’s Headquarters. It is significant as the only one of her works not portraying Indigenous subjects. Waggoner points to Pyle’s influence in the quasi-Impressionistic brushwork De Cora adopted in this canvas. Located near the site of the Battle of Brandywine, the historic Gideon Gilpin House depicted in the painting, known locally as Lafayette’s Headquarters, was the house in where Pyle’s female students were lodged during his summer school.Besides art instruction, Pyle's students enjoyed outdoor activities and musical gatherings at his house (actually the home of his in-laws, the Painters) during which De Cora played the piano. Fellow students remembered the summer of 1898 as “an exhilarating time” (Waggoner, p. 77).

Pyle and De Cora were for the most part a compatible student-teacher match. However, De Cora was concerned by Pyle’s apparent disregard for authenticity in traditional Indigenous attire, despite his careful attention to historical accuracy for White people’s clothing in, say, scenes of Medieval England or Colonial America. When borrowing a Winnebago woman’s outfit to make a study, De Cora recalled that Pyle turned the leggings into sleeves and inappropriately added feathers (Waggoner, p. 70). According to a colleague, De Cora further disliked how the other students seemed to simply copy their teacher and once asserted to Pyle that she was an Indian and as such did not wish to paint exactly like a White man. Waggoner suggests that De Cora may have also felt alienated by her classmates’ penchant for such subject matter as Anglo-American history and fantastical imagery drawn from Arthurian legend, the Pre-Raphaelites, and other European cultural traditions (Waggoner, p. 78).

Of her time at Drexel, De Cora said in her autobiographical article that “I used to hear a great deal of discussion among the students, and instructors as well, on the sentiments of ‘Commercial’ art and ‘Art for art’s sake.’ I was swayed back and forth by the conflicting views, and finally I left Philadelphia and went to Boston.” She enrolled at the Cowles Art School to study life drawing under Joseph DeCamp. He left within a year, but not before recommending her to The School of the Museum of Fine Arts, also in Boston, where she studied under Frank Benson and Edmund C. Tarbell for the next two years. Both instructors were famous for their outdoor figure paintings and interpretive use of light (Waggoner, p. 91-93).

De Cora’s subsequent work was influenced by their painterly techniques, combined with an attention to detail gained from her study with Howard Pyle. For example, in her illustrations for Mary Catherine Judd’s Wigwam Stories (Ginn & Company, 1901), Waggoner observes that, “Some . . . show thickly brushed paint, evoking DeCamp’s seascapes and Tarbell’s impressionist landscapes,” while others “are distinctly illustrative and portray intricately detailed objects and figures, as seen in her Harper’s stories.” De Cora’s headpiece and initial designs for the book were probably inspired by her coursework in decoration at the museum school (Waggoner, p. 91-93).

At this point in her career, De Cora's interest began to turn toward design. “Perhaps it was well that I had not over studied the prescribed methods of European decoration,” she wrote, “for then my aboriginal qualities could never have asserted themselves.” She eventually concluded that “designing is the best channel in which to convey the native qualities of the Indian’s decorative talent.”

De Cora brought this philosophy to her work when in 1906 she was hired as an art teacher by the Carlisle Industrial Indian School in Pennsylvania. She ends her 1911 autobiography with the statement that “[t]here is no doubt that the young Indian has a talent for the pictorial art, and the Indian’s artistic conception is well worth recognition, and the school-trained Indians of Carlisle are developing it into possible use that it may become his contribution to American Art.” In “An Art of Survivance: Angel De Cora at Carlisle” (American Indian Quarterly, Summer & Fall 2004), Anne Ruggles Gere describes De Cora’s continuing influence on the development of Indigenous art in America, in large part due to her teaching strategy of affirming her students’ diverse tribal backgrounds and their artistic traditions and encouraging them to draw upon their heritage to build a “decorative art of distinctive National character” (Gere, p. 673).

Following De Cora’s untimely death in 1919, her friend Natalie Curtis credited De Cora with helping to advance “an American art, vital, individual, and indigenous to the soil.” This creative evolution grew with the opening of the Society of Independent Artists to Native Americans in 1921, sparking an enthusiastic response by art critic Walter Pach, archaeologist Edgar Hewett, and many other White scholars, artists and collectors. The Society held its first arts festival in Santa Fe in 1929 (later known as the “Indian Market”), followed two years later by the Exposition of Indian Tribal Art, the first major exhibition devoted to Indigenous Americans. The exhibition's presentation stressed the aesthetic qualities of the objects rather than their anthropological or historic interest, marking a significant departure from established White perspectives of Indigenous arts and culture (Gere, p. 673-675). (The Gere article referenced here is available in the Paul Preston Davis Howard Pyle Research Collection.)

Unfortunately, Angel De Cora died of pneumonia at only 47 years of age. She nevertheless offers us a fascinating window into Indigenous American life during this period. The collection donated by Paul Preston Davis preserves books, photographs, scholarly and popular articles (published both during her lifetime and since), biographical sources, and Davis's own notes and email correspondence with other researchers. Primary sources include The Outlook: An Illustrated Weekly Journal of Current Events (1/14/1920), which has a cover story about De Cora; Carlisle Indian School newspapers transcribed by Linda Waggoner; bound issues of The Red Man; and copies of letters between Howard Pyle and the United States National Museum (now the National Museum of Natural History) in Washington, D.C., discussing De Cora. In addition to several modern books on Native American topics, there are three editions of Old Indian Legends edited by Zitkala-Ša (also known as Gertrude Simmons Bonnin), published in 1895, 1904, and 1985, as well as a reprint of the 1931 edition of Yellow Star by Elaine Goodale Eastman (1911). Both Old Indian Legends and Yellow Star were illustrated by De Cora.

Brandywine Teams up with Mighty Writers to Increase Access to Arts