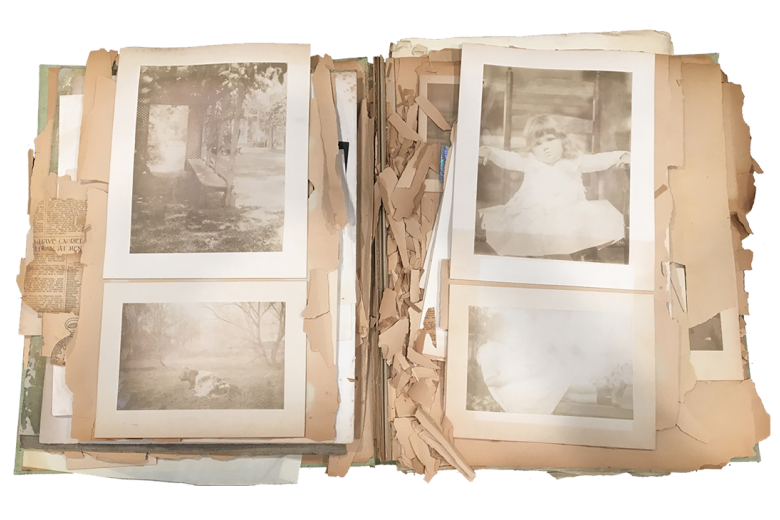 While processing the Maxfield Parrish Collection as an intern at the Walter and Leonore Annenberg Research Center, I came across a very interesting scrapbook. It was filled with photographs mounted on cardstock and other miscellaneous items inserted between the pages.

The figure in the first photograph I encountered resembled the Philadelphia-born painter Maxfield Parrish (1870-1966), dressed in a nightgown and a nightcap, seemingly frightened by a ghostly figure of a woman in a white dress. I wondered if it may be a study for a painting that the artist never created.

The majority of the remaining photographs in the scrapbook—that depict an unidentified house and a family with several children, and other individuals—most likely date to the late nineteenth century and early twentieth century, based on the clothing that the individuals are wearing.

The inserted items vary from newspaper clippings to art prints. One interesting standout was a two-page child’s report on how sugar is made on St. Simon’s Island, Georgia. This report speaks to the Parrish children’s frequent trips to that locale with their mother, artist and writer Lydia Parrish (1871-1953), who later wrote Slave Songs of the Georgia Sea Islands (1942).

Another standout was a large, folded piece of canvas painted in oil colors of blue and gold, seemingly cut from a Parrish landscape painting. Certain items in the scrapbook were obvious later additions, such as a photocopy of a published photographic image of Parrish’s machine shop in Plainfield, New Hampshire.

Unfortunately, when the Brandywine River Museum of Art received the donation of the Maxfield Parrish Collection, this scrapbook was in dire need of preservation. Only a handful of the photographs remained attached to remnants of the pages. The rest of the items were loosely tucked between the covers.

The cardstock upon which the scrapbook photographs were mounted succeeded in preventing tears and other damage, and direct contact with the acidic pages, but a few of them had cracked along the edges. As for the inserts, most of them were in decent condition, except for two fragments of newspaper clippings that were actively crumbling away.

The first step was to photographically document the scrapbook cover to cover to record the order in which all items appeared within the scrapbook. A printout of the photographic documentation was placed with the collection, to simulate the experience of reading the scrapbook in its original state at the time it was donated. Then, the remaining pages and individual objects were digitized at a high resolution according to the Museum’s standards, to preserve the images themselves. It was then time to rehouse the items.

First, each photograph and its protective cardboard mount was carefully removed from the scrapbook’s crumbling acidic paper with a scalpel, which proved manageable because the glue had become quite dry. When a handwritten number accompanied a photograph, the number was cut out from the scrapbook paper and housed with its corresponding photograph. The photographs were placed in archival polyester sleeves for ease of viewing and backed by acid-free paper.

Having been securely rehoused, the materials were kept in their original order and placed in acid-free folders inside a legal-sized archival box. The two oversized items that did not fit in the legal-sized box—the aforementioned canvas and a photograph of school students and teachers—were placed in preservation sleeves and folders and stored with the scrapbook.

The scrapbook itself was gently brushed to remove any remaining debris from the crumbling pages and wrapped in archival tissue. The only items that were left in it were the few blank pages that were still attach to the spine and a few blank inserts, all of which were interleaved with acid-free paper.

This photo album in the Research Center’s Maxfield Parrish Collection is now ready to survive the passage of many more years. In its newly secured state, and its listing on a complete finding aid of the Parrish collection, it provides a research opportunity to identify its contents, and its relationship to three additional scrapbooks in the Parrish Collection. These include a collection of photographs of Colorado’s Broadmoor Hotel (which the artist painted in 1927), and two scrapbooks containing numerous childhood drawings by Parrish and Lydia’s children, many of which reflect aspects of their father’s art.

Along with the correspondence, notebooks and other personal items in the Parrish Collection, these scrapbooks may offer future researchers clues about Parrish’s home life that intersect with his artistic output in illuminating ways.

Header image shows the rough condition of the Maxfield Parrish scrapbook before disassembly.