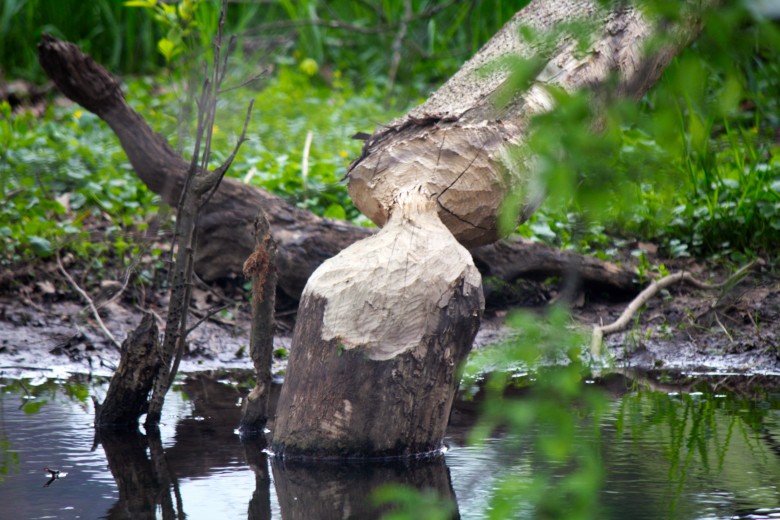 In December 2018, Conservancy staff discovered a new beaver dam and lodge at Waterloo Mills Preserve that had re-routed a stream and inundated the Preserve’s wet meadows. The first thought that came to mind was, “Oh no! How can we stop this?” Indeed, that is the first reaction that just about anybody has—natural resource professional or not—when beavers start reshaping a beloved landscape.

But if you can afford to let the changes happen, and adapt to effects on your land, you will be able to assess the benefits as well as the adverse impacts. The immediate impacts of the beavers at Waterloo included flooding a meadow and altering the meander of the stream. Beavers also took down healthy trees, including some that the Conservancy staff had planted. In the end, however, we decided not to take action to discourage or remove the beavers, and instead observed the effects of the dam over the last few months. One of the most noticeable outcomes was the change in pond hydrology, which increased the surface of water and attracted varieties of waterfowl that had not been seen in Waterloo before. The Conservancy’s Waterloo Mills Preserve manager also installed nest boxes for wood ducks and prothonotary warblers, who have all been attracted to the modified habitat. And the beavers are replanting trees as they go: willows and dogwoods readily regrow from the cut stalks that get stuck in the wet soil. While we are still taking a “wait-and-see approach” when it comes to the overall handling of the beavers, visitors to Waterloo Mills Preserve—and staff, too!—get to enjoy seeing this fascinating mammal, whose engineering exploits rival our own species for their impact on the landscape.North America’s largest rodent, the beaver (Castor canadensis), is supremely well adapted to life in and around fresh water. Its fur is waterproof; its rear toes are webbed; and its eyelids have a clear inner layer so it can see underwater. Its tail is flattened and sheathed in a hardened skin, which beavers use to slap on the water surface to communicate alarm. The tail is also used as a propeller and a rudder while swimming; as a counter-balance when sitting or carrying branches; and as a fat reserve of energy during winter.

Denizens of rivers, streams, lakes and ponds, beavers live in lodges that they construct from tree branches, or less commonly, in riverbank burrows that may have a kind of vestibule of tree branches. The dome-shaped lodge is surrounded by water, with its entrance below the surface.

Beavers are herbivorous: they eat only plants. Their diet includes grass, reeds, cattails and other aquatic plants, but they favor tree leaves, buds and inner bark (cambium). Cambium contains sugars, starch and nutrients. A beaver’s gastrointestinal system hosts microbes that enable it to digest the cellulose in bark. In winter, when trees are dormant and aquatic plants absent, the beaver relies on trees that it cuts and stores in autumn. The food cache is not in the lodge, but anchored just outside an entrance, underwater.

Beavers cut down trees to access the bark they can’t reach. They fell trees by gnawing around the trunk, leaving a characteristic conical top when the tree falls. Those pointy-top stumps are a sure sign of beaver activity nearby.

Limbs and branches are gnawed from the felled trees to be used as building materials. And many—though not all—beavers build dams. A beaver dam is an engineering marvel. Using only their paws and teeth, beavers weave a lattice of sticks and mud to contain flowing water. Impounding the water enables the beavers to build their lodge protected by a moat.

At Waterloo Mills Preserve, beavers have built several dams in response to the pond that their first dam created. Stream-fed, the pond continues to rise behind the dam, and it seeks new outlets which the beavers must then dam up. Where the ponded stream backs up over the banks it makes new wetlands out of formerly dry meadows. These new wetlands are habitat for a wide variety of plant and animal species. Freshwater wetlands are important to ecosystems not only because of the habitat they create for specialized birds, amphibians and insects, but also because they absorb rain and floodwaters and filter sediment and pollutants.

Beaver engineering played a huge role in shaping the North American landscape. Before human settlement, as many as 400 million beavers lived on this continent. Their dams created innumerable marshes, wetlands and ponds. But beavers were ferociously trapped for their fur during the 18h and 19th centuries. By the late 1800s beavers had essentially disappeared from Pennsylvania. They were reintroduced beginning in 1917; with the return of forests to much of the state’s landscape, and regulated trapping, today there are beavers throughout the state.

Beavers live in small family groups (colonies) consisting of a male and female, and their immature offspring (kits). When beavers are mature enough to seek their own mate, around two years old, they leave the colony and strike out on their own.

After a few years the beavers max out the local tree population, so the colony must re-locate. After they leave, the beaver pond continues to be an element of the ecosystem as long as the dam is intact. Eventually the dam will disintegrate, or water will overtop it. Once again there will be a change to the ecosystem that will require adaptation. Humans who have grown used to the pond in their backyards may now find themselves missing the beavers they once found threatening.

Wildlife of Pennsylvania and the Northeast by Charles Fergus (Stackpole Books)