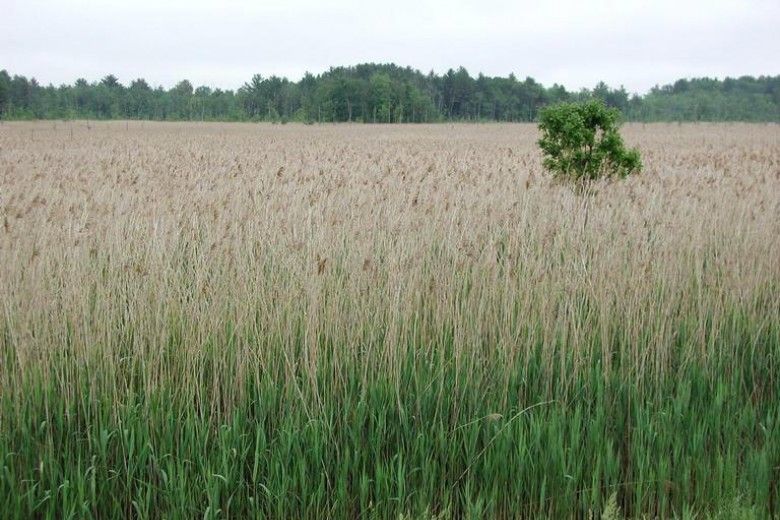 Many invasive species become such a large and familiar part of our landscape that we stop noticing them. Common Reed or Phragmites australis may be one of these plants. It lines highways, fills drainage basins, dominates floodplains and in some places covers thousands of acres. It is so common that even though it often grows to well over 10 feet, we barely notice it. In the northeastern United States and Canada this one plant has cost millions to state and local economies.

Phragmites fills picturesque ponds making them impenetrable to boats or swimmers and impassible for fish. It clogs drainage structures, causing flooding. It obscures waterside vistas. It can even block lines of sight on roadways. It is a fire hazard, as the large volume of dieback it produces every year easily catches fire. Phragmites’ effects on ecosystems can be staggering. It forms dense monocultures where once there were hundreds of different plant species, greatly reducing the number and variety of wildlife an area can support. It even changes the hydrology of the areas it invades; drying wet areas, slowing currents, vastly changing how the water and land interact.

Phragmites is found on every continent, except Antarctica. While closely related, there are distinct sub-species, including one native to North America, American Common Reed (Phragmites australis ssp. Americanus). There are stable native populations of American Common Reed throughout the northern United States. This native subspecies forms small sparse stands, living harmoniously with many other native plants. The native form is uncommon in our area. The invasive is a subspecies that came from Europe. European phragmites may have been dumped in the harbors of the eastern United States and Canada as early as the 1700s by ships releasing ballast as they entered port. It may also have been delivered in shipments of peat. And, incredibly, there are still some nurseries that will sell unsuspecting homeowners a pot of the invasive phragmites for their pond. Phragmites is found in or around wet areas. The plants reach up to 15 feet tall. A round, central stalk supports long lance-shaped leaves. In late summer they produce large feathery, silvery purple seed heads that persists into the winter. European phragmites quickly produces dense stands. Native Cattail (Typha) also prefer wet areas and can be found in ponds and slow-moving wet areas. Cattail can be distinguished from phragmites by its solid cylindrical seed head and narrow leaves that grow from the base of the plant, not along a stalk.

Phragmites has some distinct features that allow it to dominate diverse environments. The plant is tolerant of a wide range of salinity. You find it growing alongside freshwater streams as well as in brackish marshes and even along the coast. Road salt gives it an advantage over native species that have a lower tolerance to salinity. Each plant can produce 2,000 seeds per year. The plants also produce modified stems, called rhizomes, that grow horizontally just underground. Each year the large stalks die back creating a thick mat of debris that block light to any seed that may be present. Under the stands, there is likely a bank of native seeds just waiting for a chance to germinate. Many areas where phragmites have been successfully removed have recovered without planting or seeding.

Phragmites rhizomes can grow up to six feet per year and can run over 30 feet. Every few inches along the rhizome, a new stalk can grow, even if it is broken from the parent plant. This is how phragmites produces dense stands and is one of the reasons it is so difficult to control.

Removing phragmites can be challenging, but the benefits of healthier wetlands, reduced flooding and increased visual appeal make it worth undertaking. Attempts to remove phragmites can result in larger, stronger stands if not done right. Digging the plants out is ineffective because any piece of rhizome or root left behind will restart the stand, often with more vigor than before. Any viable piece dropped can create a new stand. Black plastic is ineffective, even on a small scale. The roots extend up to two feet down, too deep to be overheated by the plastic. They have resources to wait out their time in the darkness or extend rhizomes beyond the plastic. Biological controls such as insects or fungi that feed on the plants are being studied. There are more than 150 pests that feed on the plant in Europe, but releasing any of them here must be carefully studied before initiated.

The only nonchemical control that is effective is multiple cuttings below the water line or cutting and flooding. This is effective if you can cut below the water’s surface or control the depth of the water. Otherwise, what works is a regimen of mowing, spraying, and if possible; burning or mulching. Burning or mowing alone has led to stronger stands. Spraying without first mowing can have limited effect because it can be difficult to get the chemical on the plants when they are 15 feet tall and protected by standing dead plants. Mowing before seed development in the summer, followed by spraying in the fall, repeated for at least two, and up to five, years is effective. Multiple cut/spray cycles per year are recommended, using weaker concentrations of glyphosate or imazapyr in water-friendly formulations. Be sure to only use chemicals labeled for use near water, as those that are not can harm amphibians. For small stands, or the remnants of larger stands, dabbing directly onto freshly cut stems can reduce herbicide use, overspray and runoff, as well as protect emerging natives. Removal of dead stalks by fire or mulching allows herbicide to hit the growing phragmites and provides native plants space to emerge. Flail mowers break down plant material well enough so that native plants can emerge through the debris.

Eradicating, or even controlling, phragmites is a difficult task but well worth the effort. There is helpful information online that will allow you to develop and evaluate strategies. The best guidance is from the Great Lakes region, where phragmites is an even greater problem. GreatLakesPhragmites.net and Phragmites.org contain easy to use guidance. Other resources are listed below.