Algae & Duckweed: The Costs and Benefits

Algae & Duckweed: The Costs and Benefits 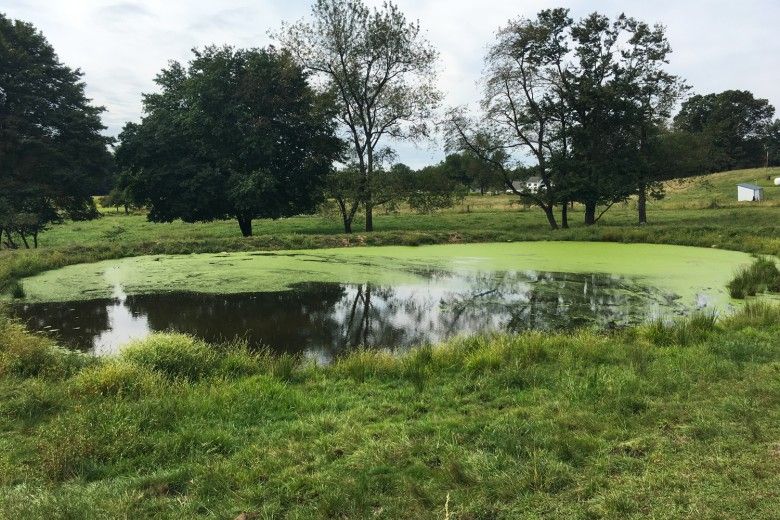 Some of the most common aquatic vegetation found in Pennsylvania ponds is duckweed and filamentous algae. Despite a similar appearance from afar, they are two very different plants that, although typically beneficial for ponds, can have a negative effect if found in excessive quantities.

Duckweed is a native, free-floating plant that can be seen on the surface, and is a bright, vibrant green. It is recognizable by its flat oval shape, varying slightly based on the variety, and is about 1/16 to 1/8 inches long with a singular root that dangles down below the surface. Duckweed reproduces by budding and fragmentation (one of the smallest plants known to do so!) and floats in large colonies. Filamentous algae, although also native, differs greatly. It is made up of single algae cells that form long threads, which clump together to make algae mats. Algae grows along the bottom of the pond, and eventually, will attach to structures in the water, thus becoming visible in dark green masses on the surface that appear mucus-like and slimy. It is commonly referred to as “pond scum.”

In the right amounts, duckweed and algae are beneficial to a pond’s ecosystem. Birds and other wildlife consume duckweed. Although filamentous algae has no known direct food value, after it dies the decomposed plant matter forms detritus—a food source for many invertebrates. In addition, both plants act as valuable habitats for micro/macro invertebrates and other aquatic wildlife. However, if a significant portion of your pond is covered in duckweed or algae, it can cause major disruptions.

Algae and duckweed produce oxygen as a by-product of photosynthesis. This is vital for aquatic creatures. At night or when sunlight is not available, however, the plants consume oxygen. In certain cases, the amount of oxygen being used can exceed the amount being produced, and thus results in oxygen depletion and fish kills. This often happens during hot summer months, when the water is warmer and unable to hold greater amounts of oxygen, or on cloudy days, when there is minimal sun.

Another issue that comes from excessive growth is stratification—which usually occurs in deep ponds. The water separates into warmer, oxygen-producing surface levels and colder, oxygen-consuming lower levels, due to shade from surface vegetation. Thus, the colder bottom layer that lacks oxygen accumulates potentially toxic compounds. Fish kills, reduced fish growth and physiological stress can occur when this bottom layer is mixed too rapidly with the rest of the pond, known as turnover. This happens oftentimes after heavy rain or wind.

In addition, excess algae and duckweed reduces sunlight penetration, and thus causes the elimination of other vegetation, unbalancing the ecosystem.

Since oxygen depletion is sometimes hard to detect unless at extreme levels, keeping track of the dissolved oxygen levels in your pond with either a test kit or an oxygen meter can be extremely helpful.

Excessive growth of algae and duckweed results from nutrients and sediment entering the pond from sources on the land, such as erosion from development or fertilizer runoff from agricultural fields or lawns. The best way to deal with excessive growth is to reduce and redirect this runoff away from your pond. Limiting fertilizer application near ponds reduces the nutrient source. Establishing healthy vegetative buffers (especially shrubs, native grasses and wildflowers) to catch and filter runoff keeps sediment and nutrients from entering the pond. A buffer of three to five feet between mowed areas and pond can be highly effective; it also attracts dragonflies and frogs, which help control insects.

Reducing and redirecting sources of excess nutrients is the most effective way to control excess algae and duckweed growth and should always be the first step. Other methods of control can be used in tandem to maximize results.

One method is simply to rake off the vegetation from the pond surface. After doing so, the removed vegetation must be disposed away from your pond to prevent re-entry from runoff.

Another option is aeration, which adds oxygen to the bottom layers of the pond. This added oxygen is what existing aerobic bacteria needs to break down organic material and sediment faster, thus removing excess phosphorous from the water for algae use. This can be accomplished by an internal aeration device or a running water feature.

Limiting the access of waterfowl to your pond can reduce the spread of duckweed from other bodies of water. This can be done by implementing loose netting over and around your pond.

Grass carp, which consume duckweed, act as another biological control that can keep the amount of duckweed at a healthy level. One must receive a state permit and purchase from an approved hatchery.

Barley straw can also be added to the surface of the pond in late winter or early spring to prevent excessive algae growth, about 3-5 bales per acre of pond, separated and submerged in loose bundles by wire or string.

There are also water additives that can reduce algae growth. They contain bacteria and enzymes that consume nutrients in the water that are vital to algae. They should not be used in a pond with overflow or frequent flooding.

There are aquatic herbicides that can be used to control plants and algae, but they should be used judiciously. If not used correctly, these chemicals can ruin pond health. You first must properly identify the plant or algae you are trying to control so that you can choose the right herbicide. Permits may be required for herbicide application and, as always, label instructions must be carefully followed.

Algae and duckweed are only two of many species that can be found in your pond. Below are some aquatic species, both native and non-native, that are common in Pennsylvania ponds.

Native Aquatic Vegetation: Not all vegetation is hurtful to your pond—far from it! There is a wide range of native aquatic plants that offer helpful habitat and food sources for your pond’s ecosystem. Some common native aquatic plants, in addition to duckweed, include elodea, water fern, spatterdock and coontail.

Non-native Aquatic Vegetation: Although non-native plants are often sold for landscaping purposes due to their appealing aesthetics, many are hardy and invasive, which make them potentially problematic for the local ecosystem. It is always best to remove non-natives and invasives for this reason, and to choose as many native plants as possible for your pond. Some common non-native aquatic plants are parrotfeather, Eurasian milfoil, Illinois Pondweed and hydrilla.

For further information on duckweed and algae maintenance and identification, visit the Penn State website here and here.

For further information and identification of both native and non-native pond vegetation, click here and here.