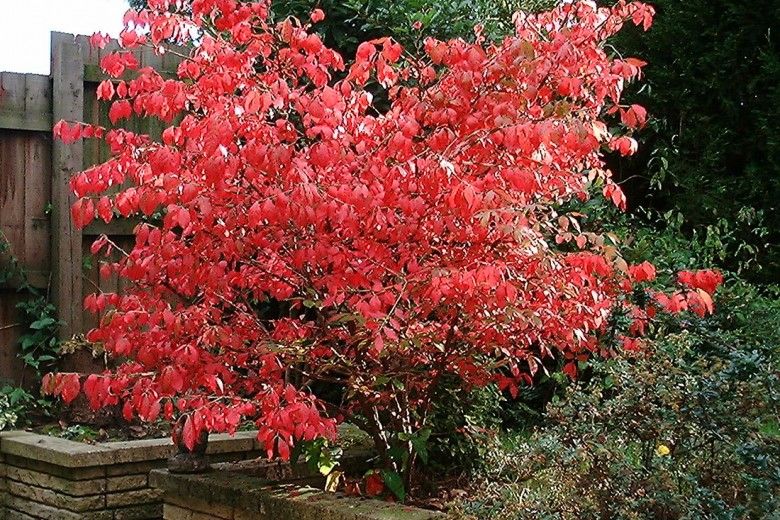 Euonymus alatus is commonly known as burning bush because of its almost neon-red fall color. While this quality—combined with its low maintenance—has made the shrub an ornamental staple in suburban landscaping, it has also become far too common in the woodlands of the eastern United States, where it is recognized as an invasive species in 21 states.

Burning bush prodigiously reproduces by seed which are dispersed by birds to nearby woodland and meadows. Once established, these plants will form a dense thicket capable of outcompeting almost any native plant.

Burning bush is native to northeastern Asia and was brought to North America around 1860 as an ornamental shrub. It has been widely cultivated and planted throughout the eastern United States and Midwest. Soon after its introduction, it escaped into the wild and has now naturalized in over 25 states, including Pennsylvania and Delaware.

Burning bush is a woody shrub that thrives in a shady understory with well-draining soil, but it can also grow in full or part sun. Its height at maturity is typically 10-15 feet, but landscape shrubs are often pruned to be smaller. The elliptical leaves are one to two inches long and are arranged oppositely with finely toothed margins.

Leaves take on the distinctive red color in the autumn. During the rest of the year, the most unique feature of burning bush is the brownish, corky “wings” that run up and down each stem, giving rise to the shrub’s other common name: winged euonymus.

Delaware recently passed legislation banning the sale of burning bush, along with 36 other invasive species. The ban doesn’t take effect until July 2022 and the plant is still widely available in Pennsylvania, so for now it is important to refrain from planting this species. For already existing burning bush, several methods can be used to eradicate or control its spread.

Young plants in loose soil can be easily pulled by hand. Any seeds should be disposed of in a way that will prevent them from escaping into the wild. For larger plants, foliar herbicide application during the fall is the most effective method—fall is also a great time to identify the bright red shrubs in a forest understory and remove them by cutting. After cutting the main stem, a treatment of glyphosate or triclopyr can be applied directly to the cut stump with a spray bottle or sponge to kill the root system. Alternatively, returning to cut or mow any resprouted stems will also suppress regrowth.

When removing burning bush, it is important to replace the shrubs with native species that will provide more value to the wildlife in this area. In fact, there are even some native species in the genus Euonymus that are closely related to burning bush. For example, the strawberry shrub (Euonymus americanus) is a finely textured shrub that does well in wet areas and has a fascinating looking fruit.

The Eastern Wahoo (Euonymus atropurpureus), another native member of the genus Euonymus, grows in drier areas and possesses foliage that is very similar to burning bush. Red osier dogwood (Cornus sericea) and winterberry holly (Ilex verticillata) are two other native alternatives to burning bush that provide red color throughout autumn and winter in addition to supporting numerous native species.