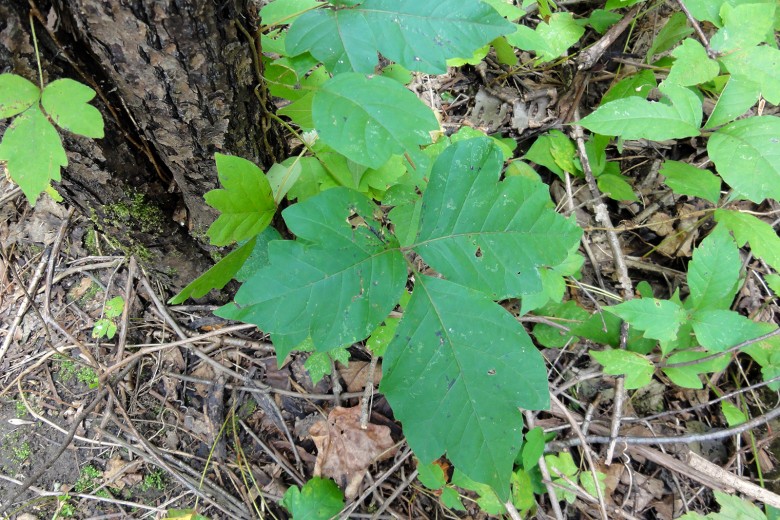 Chances are most nature goers will experience the dreaded poison ivy rash at least once in their lifetime. The easiest way to avoid the painfully itchy reaction is to steer clear of the plant. Poison ivy (Toxicodendron radicans) is a native plant that is valued by wildlife—humans are one of the few species vulnerable to its “poison.” So if you leave it alone (unless it is in a location you can’t avoid), you’ll be protecting yourself and benefiting wildlife.

Poison ivy can be difficult to identify because of its variable appearance. It can be found as a vine climbing fences, posts and trees, laying low as a trail vine, or as a shrub. The vine is the easiest form to identify because of its unique “hairy” appearance; the hairs are rootlets. The three leaves of poison ivy all have pointed tips. The leaf edges can be either serrated or smooth. The leaves typically look smooth and glossy with the middle leaf being the longest.

Poison ivy is typically reddish in the fall, while green to yellow the remainder of the year. Most have heard the catchy phrase, “leaves of three let it be”—an easy-to-remember expression that helps identify the plant. But this generalized saying gives some other common, harmless plants a bad rap.

Below are a few common look-alike species that are often confused for poison ivy. You can also click here to download and print a handy field guide.

Virginia Creeper is a native woody vine that has high value to wildlife, providing shelter and food. The best method of telling apart Virginia creeper and poison ivy is the number of leaves. Poison ivy has three, while Virginia creeper typically has five. While young Virginia creeper can have three leaves, it also has smooth vines, not hairy. If you can’t see the vine, avoid the plant! Virginia Creeper leaves range from 2 to 6 inches long with serrated edges. Young leaves emerge red, turning green as they mature (and brilliant red again in autumn). Virginia creeper can be found throughout the southern, midwestern and eastern half of the U.S., and it is often seen in forests, along fence lines, climbing up trees, and along streambanks. It is a tolerant species, thriving in full sun to partial shade.

Boxelder, part of the maple family, is a native bottomland tree with a wide range of distribution across the United States. Boxelder is often confused with poison ivy only in its young life as a sapling. Both plants have compound leaves, with each leaf consisting of three leaflets with the middle leaflet on the longest stalk. The leaf arrangement of these two species is the easiest giveaway of telling the two apart. Poison ivy leaves are arranged alternately along the vine and box elder leaves have an opposite arrangement. Another clue is the young leaf color. A young poison ivy plant is almost always reddish in color while a young boxelder is usually a light yellow to green. In maturity, boxelder trees and poison ivy are easy to distinguish from one another.

Mock strawberry is a low growing invasive species found in patches on lawns, fields and dry openings. Like poison ivy, mock strawberry has leaves of three, up to an inch and a half long with serrated edges. Small yellow flowers bloom from April to June. The tasteless fruit of mock strawberry look like a much smaller, spikier version of the typical garden produce strawberry. The leaves of mock strawberry are much more yellow than poison ivy and connect to the stem at one central point. This contrasts with poison ivy leaves, which are opposite with the terminal leaflet on a longer stem stalk—an important distinguishing characteristic to tell these two apart.

Jack-in-the-pulpit is a more unusual, native, shade-loving woodland species. Three smooth-edged leaflets meet from a common point at the top of each leaf steam. Leaves can become quite wide, reaching up to 8 inches, and are broadly oval with tapered tips. On a separate stalk, a large, hooded flower blossoms with a cluster of red berries growing in late summer. The leaves of three can be confused with poison ivy. However, if you look at the center vein of jack-in-the-pulpit, it does not reach the edge of the leaf tip. The center vein of a poison ivy leaf runs all the way to the edge.

Hog peanut is a native herbaceous annual vine plant that is in the pea family. The plant grows from 2 to 8 feet long, twining itself to nearby vegetation and branches. Hog peanut grows in moister soils in woodlands and meadows. This species has two flower types: One that forms an open flower on the upper stem and one that never opens on the ground. The flowers that do open have five petals and range in color from white to lavender. While hog peanut has leaves of three, they are much more egg shaped than poison ivy. The stems of hog peanut are very thin and fragile compared to poison ivy and the leaves have fewer veins.