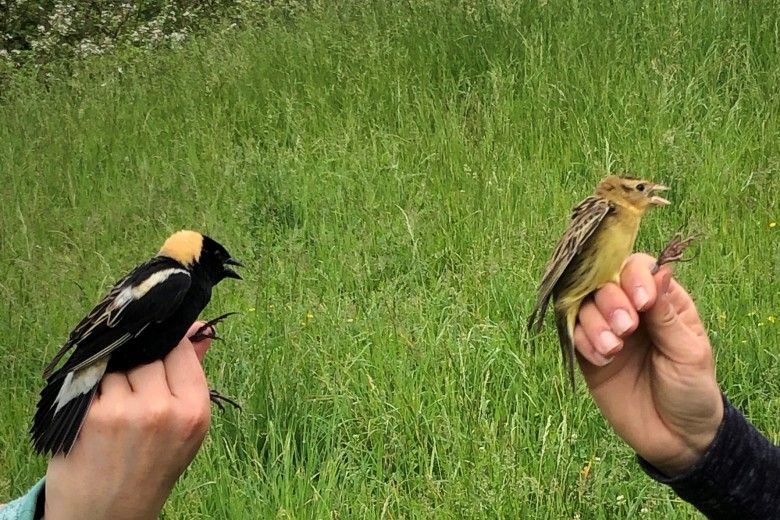 The first time you hear a Bobolink singing, you know you have encountered something extraordinary. The Bobolink song has been compared to the beeping and whirling noises made by R2-D2 in the Star Wars movies. Standing in a meadow or hayfield, their distinct song rises above the sounds that signify nature at work. Their burbling song fills the air as they flutter up from the tall grasses, awkwardly flapping their wings as if to keep from falling out of the sky. But what they may lack in grace is far overshadowed by their liveliness and vitality.

I first encountered Bobolinks while doing research for my dissertation on grassland birds in southern Chester County. With its wide-ranging agricultural fields and large blocks of preserved land that provide refuge for these species and many more, this area was an ideal location to study habitat preferences among six grassland bird species, including the Bobolink. Compared to other bird groups, grassland birds have shown steeper and more widespread population declines as a result of habitat loss, landscape fragmentation and earlier mowing regimes that occur during peak breeding season. My goal was to survey a large swath of this landscape to determine which characteristics make one field more suitable than another for these birds. My research offered a landscape-scale view of habitat use, but the question remained: how does a single population use the land throughout the breeding season?

This past summer, with a team of avian researchers from Willistown Conservation Trust, which is part of the Northeast Motus Collaboration, I began investigating that question in the hayfields at Buck and Doe Farm and Buck Run Farm. Unlike previous summers when I dashed from field to field to get “the big picture,” this research required a pace that was slower and more deliberate. We were there to observe the rhythms of the season as they revealed themselves over the days, weeks and months of the breeding season.

We began our observations on May 7, 2020. On this mid-spring morning, between the two farms we observed at least 50 male Bobolinks. Their arrival marked the completion of their annual migration, a route that carries them over 12,000 miles. Some were busy establishing their territories, but the majority of them were just stopping over on their way to their breeding grounds farther north. The males were striking, perhaps more so as we emerged from the doldrums of the quarantine. Bobolinks are the only birds to have black underparts and a white back—they have been described as wearing a backwards tuxedo, complete with waistcoat. The yellow patch on the back of their heads gives the appearance of a jaunty cap.

Over the next week we waited for the females to join the males. By mid-May they had arrived, bringing increased activity and energy to the fields. The males engaged in courtship displays, chasing the females through the fields while their songs warned other males to find another mate. We also saw females carrying nesting materials, which meant we were observing the initiation of the breeding cycle. It was during this time that we banded our first Bobolinks, a male and female nesting at Buck Run Farm. Field research is most often done at a distance, so having these birds in hand not only gave us a greater appreciation for their form and beauty, but it also solidified the sense of urgency around conserving the species.

The first week in June presented evidence of the parents’ unceasing efforts—eggs! After much searching, we found nests with eggs at both farms. Bobolinks are described as ground-nesters. They use grasses to form a shallow cup that lies on the ground among the stems of grass that tower over the nest and camouflage them from predators (and researchers). The eggs incubate for an average of 12 days. Though we were unsure when the eggs were laid, we knew if the nests were not disturbed, baby birds would be breaking out of their shells in the near future. And they did…at one nest site at Buck and Doe Farm, I discovered downy, hungry babies gaping for a morsel of food.

Over the next few weeks, we watched as young birds from several different nests matured. They went from hopping along the ground to taking short flights to being able to maintain longer, sustained flights. Those days of development were crucial for their survival, but too often fields are mowed during these early days of life. These young birds were fortunate to be in fields that remained undisturbed until almost the end of June. In fact, because the number of birds using Buck and Doe Farm nearly tripled, we believe this field became a refuge for Bobolinks that had occupied other fields in the area that had earlier mow dates.

After Buck and Doe Farm was mowed, the mixed-age flock made its way up the hill to Buck Run Farm, where the fields are “mowed” by cows late in August. Over the course of the next six or seven weeks, the birds settled into post-breeding activity. The birds lost their aggressiveness as they no longer had territories to defend. Instead, their efforts were concentrated on eating heartily and coaching the juveniles through training flights. Their behavior wasn’t the only thing to change—their appearance did as well. With each visit, the males’ distinctive plumage became more muted as they molted their feathers until they eventually became indistinguishable from the females and juveniles.

By the third week in August, the bulk of the flock had begun their southern migration, leaving a few straggling juveniles to prolong summer for a few more days before setting off to join the other Bobolinks on their wintering grounds.

With the departure of the Bobolinks, our field season ended. But we look forward to next year when we expand our research goals. As part of the Northeast Motus Collaboration, we will be installing a Motus station at Buck Run Farm, which uses radio telemetry to track wildlife that has been fitted with Motus nanotags. By fitting the Bobolinks with the nanotags early in the season, we will be able to track their movements using a hand-held receiver. Then, because our Motus station will be part of the 892-station network that extends from the Canadian Arctic to South America, we will follow our birds on their migration. We will be compiling our data with research sites in Vermont and Maine to gain a better understanding of Bobolink movement throughout the Northeast.

The data generated from this project will help us determine habitat preferences, the timing of the stages of breeding, and the survival rates of both adults and juveniles during the breeding, post-breeding and migratory periods. We hope our findings will inform land management in areas that provide essential habitat for the survival and growth of this grassland species.

For more information regarding the Bobolink Breeding Survey, please contact Lisa Kiziuk of the Northeast Motus Collaboration, a partner of the Willistown Conservation Trust. To learn more about Bobolink research in the Northeast, visit www.bobolinkproject.com.

The Forgotten Pollinators: How You Can Help Save Endangered Moths