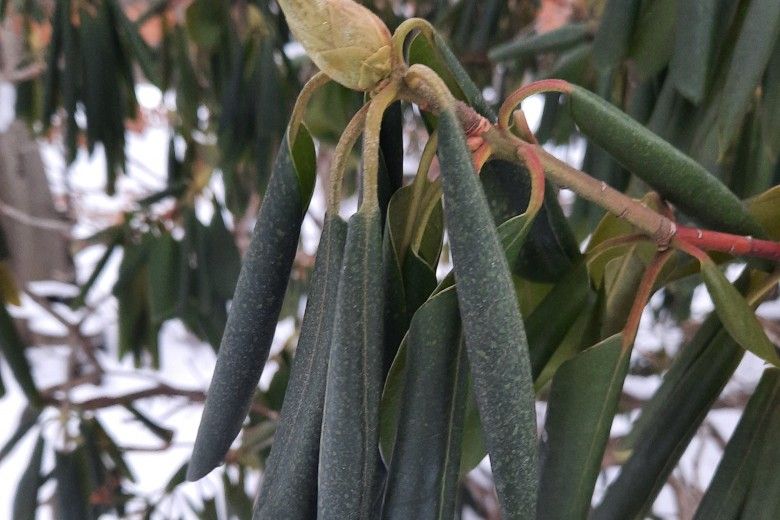 Did you know that some rhododendrons can act as a living thermometer, showing you just how cold it is by the curl of their leaves?

Around Christmas, temperatures were in the low teens in Western Pennsylvania and wind chills were below zero.  Looking across the yard at a neighbor’s rhododendron bush, I knew it was cold before I even stepped outside. The rhododendron’s leaves were coiled and hanging down like dark green beans in my summer garden.

Thermonasty is the term for this phenomenon. Merriam-Webster Dictionary defines thermonasty as “a nastic (plant) movement that is associated with changes in temperature” and could refer to the folding of leaves from thermal stress or the opening of certain flowers. Tulips are an easily recognizable example of thermonasty. Think of how tulips close as night and cooler temperatures descend and in cool, cloudy or rainy weather to preserve their pollen for pollinators that would not be out in those conditions.

While the exact reason why rhododendrons exhibit thermonasty is unknown, there are several theories, and the truth might be a blend of some and it might be species-specific, as demonstrated in research conducted by Iowa State University.2

Rhododendrons are loved for their evergreen, large leaves, which are covered with stomata—the small pores, typically on the underside of a leaf, that allow for gas exchange. One theory is that, in the winter, with water being locked up in snow and ice, rhododendrons can’t afford to lose water, so the stomata close, and the curling of leaves helps protect the stomata and prevent water loss—or desiccation. This theory has been debunked since stomata do not open in the cold and the waxy surface of the leaf inhibits water loss.

Another theory is that the drooping and curling protects the leaves from too much sun. You might ask, “Wouldn’t a plant crave sunshine in the winter?” The answer is, not so much. Erik Tallak Nilsen states in his paper, “Why Do Rhododendron Leaves Curl?” that “leaf cell membranes are susceptible to damage by intense radiation when they are cold,” particularly the membranes of chloroplasts, which are responsible for converting the energy from sunlight into food for green plants.3 Rhododendrons are understory shrubs that are typically exposed to the most sunlight in the winter, when they are dormant, and too much sun may cause photo-oxidative damage, reducing the plant’s ability to photosynthesize.

It seems the most important reason to protect leaves from too much sun is that the rapid thawing in the sunlight during the day and subsequent refreezing during the night could damage and kill the leaves, which would be problematic in the next growing season. In the aforementioned paper, Mr. Nilsen states that, “The field of cryogenics has clearly demonstrated that tissues are best preserved by rapid freezing and slow rewarming.” Curled, drooping leaves thaw more slowly than flat, horizontal leaves since less of the leaf is exposed to sunlight, and so thermonasty lessens the number of times a leaf experiences the freeze/thaw cycle and protects cell integrity.

Interestingly, the curled leaves also seem to make a little microclimate for themselves. Mr. Nilsen states that, from calculations, the temperature of curled leaves is the same as the air temperature, whereas flat leaves may be several degrees colder. When you’re living on the edge, those few degrees matter!

So while science is still determining why some rhododendron leaves droop and curl, it’s a fun way to observe a plant’s interaction with its ambient environment. Bring a curled leaf inside and watch how quickly it unfurls and then be grateful for your warm home!

Leaves that won't get lost