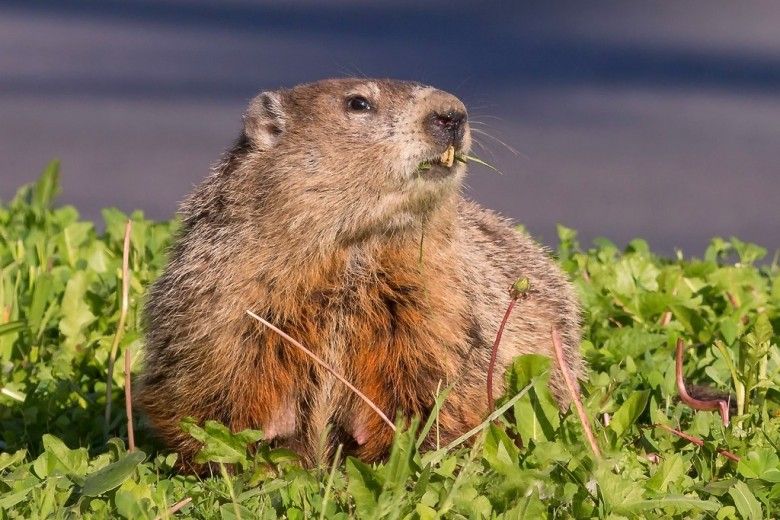 Each year, on February 2, a groundhog named Phil pokes his head out of his hole in Punxsutawney, Pennsylvania and predicts how much longer winter will last. It’s a strange tradition, but it contains some truth. From late February through mid-March, groundhogs—also called woodchucks—come out of their burrows after a long hibernation, ensuring there won’t be six more weeks of winter.

But along with the promise of warmer weather, groundhogs’ emergence ushers in a season of discontent for farmers. After emerging from their months-long hibernation, the malnourished marmots devour every plant they lay their eyes on. They don’t stop their voraciousness until winter, fattening themselves up to survive another hibernation.

Their burrows can also cause problems. Groundhogs will dig right under protective fences that keep most other pests out. If the burrows are beneath a field, they can cause the ground to collapse under the weight of tractors or injure an unsuspecting horse that accidentally steps into their holes. In the rare cases, groundhog burrows can even undermine the foundation of buildings.

Groundhogs' pesky habits often overshadow the benefits they provide to both the ecosystem and humans—even farmers and gardeners. So, in celebration of Groundhog Day, let’s explore the ways in which groundhogs help make our world a better place.

When digging, groundhogs help aerate soil. Roots, like all other parts of the plant, have to respire, taking in oxygen and emitting carbon dioxide. In unturned soil, roots deplete their limited oxygen while CO2accumulates, making it hard for them to ‘breathe.’ When groundhogs dig their burrows, they expose deep, compacted soil to the atmosphere, feeding them oxygen that sustains roots. As long as the tunnels remain, oxygen will keep coming into the soil and helping plants.

Groundhog’s burrowing also helps nutrients mix into the soil. Every year organic matter accumulates on top of the soil. This material is full of carbohydrates that organisms such as worms and mites need to survive. At the same time, other nutrients like iron, calcium and phosphorus gradually get leached from the topsoil as rainwater pulls them deeper. When a groundhog digs its burrow, it delivers organic matter deeper, providing food for microorganisms, and brings minerals to the surface—where plants reuse them.

A groundhog’s burrow is more than just a hole underground. It’s a network of interconnected tunnels and rooms with multiple entrances that can extend up to 40 feet. These are not just ideal for groundhogs, but for many other animals, too. Some fellow hibernators—such as rabbits, opossums, raccoons and skunks—will move in with groundhogs for the winter, hibernating in one of the rooms in their burrow network.

Even after groundhogs have moved away, other animals that can’t dig for themselves move into their abandoned burrows. Some of these are smaller creatures—such as chipmunks, shrews and voles—but they also attract larger predators like otters, weasels and snakes. Even foxes and coyotes will use a groundhog den. These predators hunt down mice and other agricultural vermin (even groundhogs!), which offsets some of the drawbacks that groundhogs pose to farmers.

In addition to their ecological benefits, groundhogs have helped humans in some unusual ways. Groundhogs are one of the few animals that naturally contract hepatitis B, and by studying how the virus spread through a colony and affected the rodents, researchers were able to synthesize medicines and vaccines for combatting the disease.

Groundhogs are also directly responsible for the discovery of two major archaeological sites. At the Ufferman Site in Ohio, groundhogs have unearthed countless artifacts from a village originally inhabited by Cole Native Americans. In Pennsylvania, a groundhog dug up ancient artifacts that helped researchers discover the 19,000-year-old Meadowcroft Rockshelter site—the oldest evidence of humans in the Americas ever found!

Despite all of these benefits, if you are a farmer or gardener, groundhogs can still pose a problem. If you must get rid of a burrow in your yard, follow these instructions from the Humane Society to ensure you don’t unnecessarily hurt them when removing them from your property. Hopefully, as groundhogs emerge from their dens this year, you will take a minute to appreciate all the benefits these hardworking animals bring to us!

A groundhog, gazing into a future brightened by human-marmot cooperation. (c) Ryan Jones via iNaturalist. Some rights reserved (CC BY-NC)