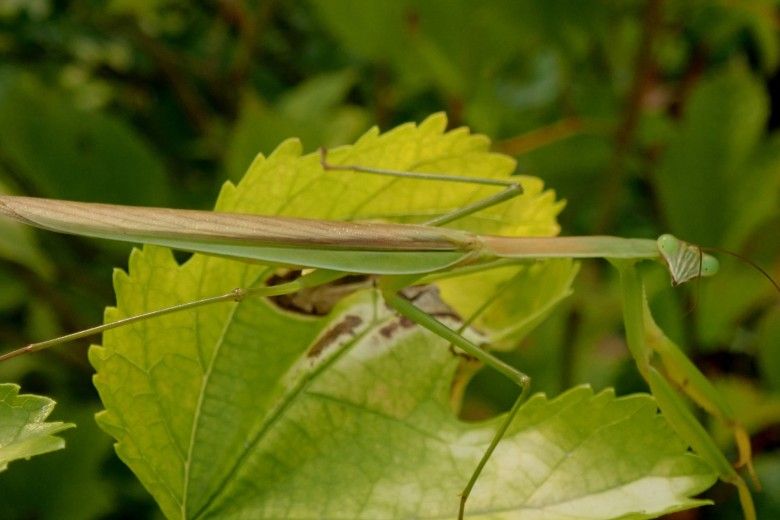 The praying mantis is a master of deception with a seemingly benign appearance. Despite its tranquil praying pose, this elusive creature is actually quite the predator of the insect world.

Most people are able to identify a praying mantis, but many are unaware there are both native and invasive species of mantises in our area. Gardeners often recognize the praying mantis as a guardian against pests. The benefit of their efficiency, however, is questionable since they do not discriminate on what will be their next meal.

The Chinese mantis is the largest mantis species in North America and can reach up to five inches in length. It was accidentally introduced to the United States in 1896 in Mt. Airy, Pennsylvania. This species has a slender build and varies in color from brown to green.

The native Carolina mantis (Stagmomantis carolina) is found across North America and is particularly abundant south from New Jersey to Florida. This particular species can range in color from green to dusty brown to grey, camouflaging into their surroundings. The Carolina mantis is a smaller mantis species, reaching only about three inches in length. If you see a mantis in your garden unfortunately, more than likely it is a non-native invasive species. Their populations are thriving in comparison to the Carolina mantises who aren’t able to compete with these larger more powerful species.

Similar coloring and markings make it difficult to tell mantis species apart. One identifying factor is to look for their egg cases, called ootheca, in your yard. The female mantis will lay her eggs in late summer to early fall. She covers her eggs with a foamy substance, which hardens similar to the texture of Styrofoam, becoming the ootheca. Depending on the species, an egg mass can contain hundreds of eggs, although only a small portion of these nymphs will survive into adulthood. From November to early May, you can spot the ootheca attached to twigs and stems or even on fence posts, siding or your fresh cut Christmas tree.

The ootheca of the native Carolina mantis is elongated and slender. It is relatively smooth and has a sequence of lighter and darker brown stripes. The Chinese mantis oothecae are much puffier. It is a round to cube shape with a foamy texture. It is one solid color of straw brown and probably the most commonly sighted in our area. The oothecae of the European mantis and the Carolina mantis are similar in shape. They are elongated but not as flattened or smooth in texture. The major difference is in color. The European mantis oothecae are solid pale brown, no striping.

The invasive Chinese and European mantis may consume pests, but they also consume a large number of beneficial pollinators and other native insects including the Carolina mantis. In order to keep populations in check, it is recommend to destroy the egg cases of the Chinese and European species before they hatch (click here to read our blog on identifying mantis oothecae). The egg masses can be crushed or cut open and submerged in water. Mantis oothecae also make a tasty snack for chickens and pet reptiles such as lizards and snakes. If you find the ootheca of the native Carolina mantis, do not disturb the egg mass. While we may not recognize these invaders as an overwhelming issue just yet, prevention is key to keeping these species at bay and allowing our natives to thrive.