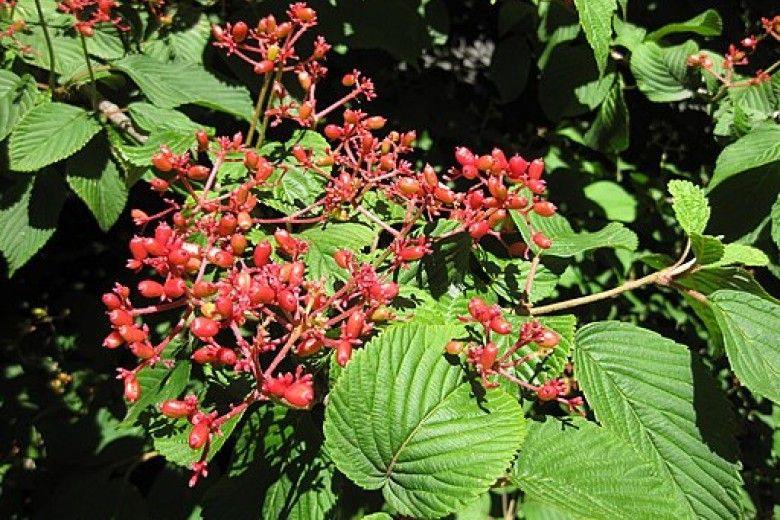 Viburnum is a genus with around 150 species of shrubs or small trees that are mostly native to temperate regions of Asia, Africa, Europe and North America. Many species have become quite popular in the horticulture trade for their attractive flowers and autumn color.  Chief among them are a number of Asian species that have been recognized as invasive in North America after vigorously spreading from gardens into natural areas, causing damage to native ecosystems along the way. In this invasive spotlight, take a closer look at one of the lesser known but very prevalent invasive viburnums: the Japanese Snowball (viburnum plicatum f. tomentosum).

The Japanese Snowball comes in two different forms. The first form was cultivated as a garden plant in Japan. It was cultivated to have large, white sterile flowers that resemble a snowball. When this cultivar was described in western science it was given the name Viburnum plicatum. Only later did botanists find the fertile wild form from which the cultivar was derived: Viburnum plicatum f. tomentosum. Due to this unusual timeline, the wild fertile form was named as if it was a cultivar. The fertile flowers on Viburnum plicatum f. tomentosum have a much different appearance but this plant is still sometimes referred to as the Japanese Snowball. Regionally, it has the common name Doublefile Viburnum. Both forms are available in the horticulture trade but only the fertile Doublefile Viburnum is capable of reproducing by seed and invading a natural area.

The Japanese Snowball is a dense, multi-stemmed, deciduous shrub that can grow up to 10 feet tall and wide. Leaves are dark green, ovate, serrated, and grow up to four inches long. Distinct impressed veins run across the upper surface of the leaves from the midrib to the edge and give the leaves a pleated appearance.

The fertile flower on Viburnum plicatum f. tomentosum is an umbel with a mass of tiny, fertile florets surrounded by a ring of sterile, cream-colored florets. The sterile florets are very showy and draw in a variety of pollinators. Flowers are pollinated in April to May and become small fruit in the fall, just before the leaves turn a deep burgundy color.

Not much is known about how this viburnum interacts with our native wildlife and plants. It earned its status as an invasive relatively recently after being observed invading woodlands throughout the Northeast and Mid-west. However, it is only listed as an invasive species in three states: Pennsylvania, Maryland and New Jersey. We do know that the seeds are dispersed widely by birds when they eat the fruit. Aside from providing some forage for birds, this viburnum will likely have a negative impact on native plants and insects because of the way it quickly spreads and crowds out the understory of a forest with dense thickets. For this reason, the U.S. Forest Service has listed it as a species of “local concern,” worth monitoring for ecological damage.

If you have this plant in a horticultural setting, you should consider removing old flowers or fruits before the seeds can be spread. For those dealing with an invasive population in a natural area, the most common approach is to cut the stems near the ground and paint the cut stems with an herbicide like triclopyr or glyphosate to stop any regrowth from the root system. Root systems can also be dug up manually, especially with younger plants. Most importantly, do your research and always plant some of our native viburnums instead of selecting a non-native species like the Japanese Snowball that can contribute to the degradation of our local forests.

How to be a Forest Steward in Your Own Backyard