Invasive Species Spotlight: An Update on the Spotted Lanternfly

Invasive Species Spotlight: An Update on the Spotted Lanternfly 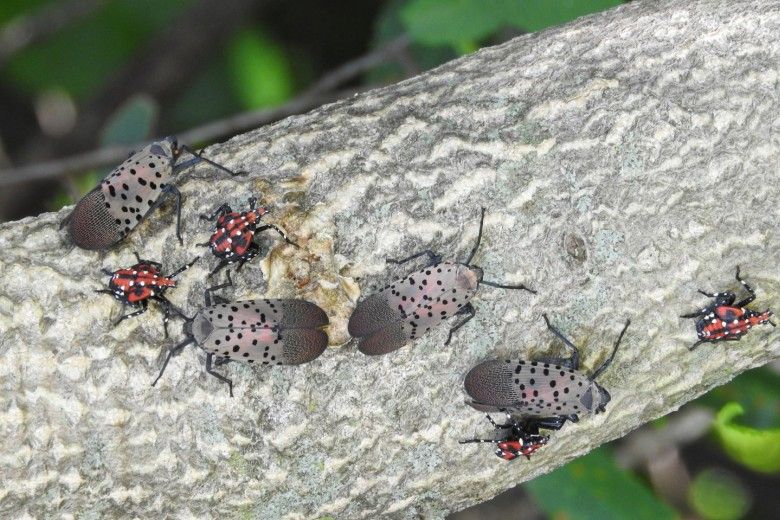 According to The Pennsylvania Department of Agriculture, the number of spotted lanternfly (Lycorma delicatula) sightings reported in 2020 have increased nearly six fold since 2019. While this figure is a reason for concern, it could be in part due to increased public outreach and awareness since last season.

While spotted lanternfly show a preference to feeding on the invasive host, tree of heaven (Ailanthus altissima), they are not picky eaters. In fact, they have been observed feeding on over 70 different species of plants, including valuable crops of the agriculture industry causing significant dents in harvestable yields. At the Brandywine Conservancy’s Waterloo Mills Preserve, spotted lanternfly have been observed feeding heavily on native grape vine, walnut, sumac and maple. They have also been spotted on non-native oriental bittersweet and porcelain berry. It is important to note that the likelihood that spotted lanternfly will actually kill the plant that they feed on is rather low. The insects are a stressor that can cause a decline in health of the plant, and when combined with additional stressors can cause serious damage and death.

There are still no easy answers on how to put a stop to the spread of spotted lanternfly. The most common suggested control methods remain scraping egg masses, sticky bands around tree trunks, traps and appropriate pesticides. This past spring, a newly designed trap, called a “circle trap,” has shown to be fairly successful in capturing the targeted spotted lanternfly and reducing the capture of other insects and critters. The circle trap is essentially a dead-end funnel that traps the spotted lanternfly in a holding tank.

Public outreach and education are also crucial in the control of spotted lanternfly. For example, most people are familiar with the striking appearance of the adult spotted lanternfly. However, it is important to recognize spotted lanternfly in all life stages. Some homeowners have taken matters into their own hands, utilizing some rather creative control techniques from electric flyswatters, bug-a-salt rifles and rubber bands, and playing their own game of whack-a-spotted lanternfly. While helpful, the reality is that the current suggested control methods are not practical for such an aggressive, fast-spreading invader. A small backyard with a handful of trees may only require a few traps, however, this is not a feasible option for a 100-acre property heavily infested with spotted lanternfly. It also makes it difficult when one landowner is vigilant about treating their property, but the next-door neighbor has no interest in doing their part. A significant unified group effort would be needed to put a dent in spotted lanternfly populations in highly infested areas.

Our best hope in controlling spotted lanternfly is to find an effective biological control agent to treat the ever-growing spread. The Penn State College of Agriculture Sciences and Cornell University recently began a study at Blue Marsh Lake to research the effectiveness of a possible biological control, Beauveria bassiana, a fungus found in soil that attacks insects. The researchers will treat designated plots of lands with biopesticides containing the fungus and compare results against the current insecticide used by Pennsylvania Department of Agriculture and the U.S. Department of Agriculture. While Beauveria bassiana does not harm birds or mammals, the study will also research the effects on non-target insect species, particularly pollinators.

Identifying isolated populations in new counties is crucial to slowing the spread of spotted lanternfly. Penn State Extension’s website is a great resource to find the most recent updates on the spotted lanternfly. Targeting these populations with the current suggested management techniques, before they are out of hand, is our best chance of preventing spread to other regions while we patiently wait for a more viable long-term control method.

The Forgotten Pollinators: How You Can Help Save Endangered Moths