Wading through Wetlands in Search of Amphibians & Reptiles

Wading through Wetlands in Search of Amphibians & Reptiles 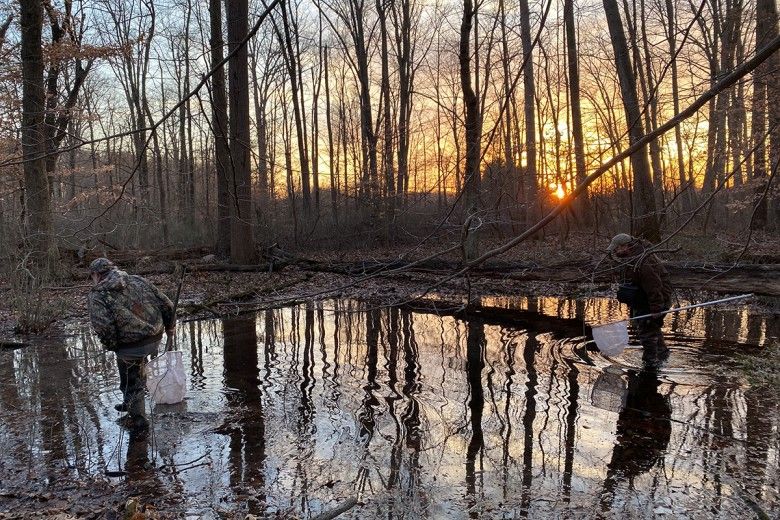 Do you have a property in Pennsylvania with wetland habitat? If so, your backyard might be a great candidate for a herpetological study! In the article below, the Brandywine’s Easement Manager, Kristen Frentzel, takes us along a trip wading through wetlands of a conserved farm to aid local scientists in collecting data for the Pennsylvania Amphibian & Reptile Survey. Learn more about the importance of this study and how you can get involved, too!

It is unseasonably warm for February, but there is still a chill in the air as the sun begins to fade into the trees on the horizon. I am excited to participate in my first ever herpetological survey (herpetology is the study of amphibians and reptiles, collectively called “herps”). There is an air of anticipation as the group dons our muck boots and hip waders. Brandon Ruhe of The Mid-Atlantic Center for Herpetology and Conservation (MACHAC) and Chris Urban from the PA Fish & Boat Commission (PFBC) have come to this farm in Kennett Square, PA in hopes of finding the eastern tiger salamander (Ambystoma tigrinum), a rare salamander species last seen in Pennsylvania by Edward Drinker Cope in the 1850s. They have reviewed aerial photographs of the region and identified ponds and wetlands on the farm that look like promising habitat for a variety of herps. Brandon and Chris are scientists collecting data for the Pennsylvania Amphibian & Reptile Survey (PARS).

The eastern tiger salamander is thought to be extirpated in Pennsylvania. It originally occurred in the southeast corner of the state. The species is also endangered in New York, New Jersey, Delaware, Maryland and Virginia. Their populations are in decline due to loss of habitat from development and fragmentation, changes in hydrology, pollution, collection for the pet trade, and climate change. Properties such as the one we surveyed in February with forestland adjacent to or containing woodland vernal pools provide suitable habitat for the eastern tiger salamander and the scientists from PARS would love to document it in Pennsylvania after all these years.

PARS is a state-sponsored atlas project launched in 2013 with the goal of gathering data on the distribution and status of all amphibians and reptiles throughout Pennsylvania. The project is a joint venture between PFBC and MACHAC. It is funded by PFBC via the State Wildlife Grants Program (as administered by U.S. Fish and Wildlife), the PA Department of Conservation and Natural Resources and MACHAC.

Data for the PARS project is collected based on a grid system that utilizes the United States Geological Survey 7.5-minute quadrangle maps. Each quadrangle (quad) is divided into six “blocks” for a total of 4,975 blocks in Pennsylvania. The PARS project goal is to document at least 25 species per quad and at least 10 species per block. Once the goal is reached, the quads and blocks are considered “closed.” Our region lacks data in some areas, and the PARS project is eager to access private lands to complete surveys and close the quads and blocks in our area.

Amphibians and reptiles are important species found in just about every Pennsylvania landscape, but very little is known about the status and distribution of them throughout the state. Compared to other groups of organisms, not much information has been collected through the years on a state-wide level. PARS is trying to change that. It is valuable work because herps are important indicators of the health of our natural places, and the presence of certain species can tell us a lot about the conditions of an area.

PARS relies on contributions from many naturalists throughout Pennsylvania. Contributors range from skilled professional scientists to amateur “citizen scientists” throughout the state. PARS is eager for volunteers to help them learn about the status and locations of Pennsylvania’s herps. If you are interested in contributing, visit their website for more information and sign up to volunteer. You can also submit a sighting via email using this form.

The professional herpetologists with MACHAC and PFBC are also interested in surveying properties in our region with documented wetland habitat. If you have wetlands on your property and would like to have someone perform a survey, contact Brandon Ruhe of the Mid-Atlantic Center for Herpetology and Conservation at [email protected].

While we did not find the eastern tiger salamander we were hoping for on that chilly February evening, that does not necessarily mean it was not there. That is the way it goes with herps during the transition from winter to spring. They may be drawn out by a warm rain one evening only to return to brumation (hibernation for cold-blooded animals) when the temperature dips back down. The visit was not for nothing, though. Even common species, such as the wood frogs and spring peepers we observed, are important for the PARS project. The next time you observe an amphibian or reptile, consider submitting your finding to PARS. And, if you have wetland habitat on your property and would like to learn more about the herps in your backyard, please reach out to schedule a survey!

Header image: Photo of Chris Urban and Brandon Ruhe in woodland vernal pool. These pools will dry up in the summer and do not support fish populations – an essential requirement for the life cycle of a salamander. Photo by Kristen Frentzel.

Exploring Nature at your Fingertips: Getting Started with iNaturalist