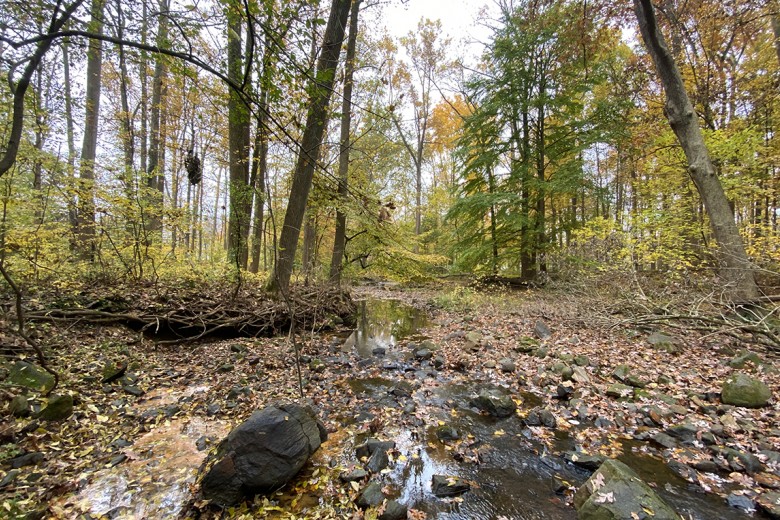 There is probably no bigger stewardship challenge in southeastern Pennsylvania and northern Delaware than our woodlands. It is hard to maintain the quality of woods, much less improve them.

Our woods have grown up over the past 75 years, on disturbed land: former farmland or clear-cuts. They are “even-aged” with mature trees creating a dense shade canopy. They are fragmented because of development.  Deer pressure is high, and threats from disease and invasive species ever-increasing.

As a result, our woods are declining. As older trees die or fall, there are not enough young trees to replace them; instead of native tree seedlings and saplings, woods are full of multiflora rose, Japanese barberry, and shrub honeysuckles; or are carpeted with ferns. If there are young trees they are non-native such as Norway Maple; or a monoculture of Beech (which deer don’t prefer).

In the language of forestry there is insufficient natural regeneration—and we must add to it in order to establish a future for our woods. Conventional wisdom says that it is infeasible to successfully plant trees in our woods because of the issues already mentioned—deer, shade, and invasives. Well, don’t believe the conventional wisdom. What follows is a success story that should encourage, even inspire, similar success stories all over the region. It is a story of one landowner who planted trees to help regenerate the woods.

A Model Case Study for Success

The Conservancy holds an easement on a property with about two and a half acres of woods along a valley above a stream tributary to the Brandywine Creek. The rocky hillside slopes down to a level floodplain/braided wetlands along the stream. Trees are predominantly oak, hickory, tulip poplar, black walnut, and red maple as well as sassafras, hornbeam and dogwood in the understory. There is Beech and sycamore in the lower elevations. And there is a great deal of invasive stiltgrass.

As a result of tree fall and removal, several openings developed in the canopy, letting light in. In a healthy woods, these canopy openings create opportunities for native tree seedlings, which are always present, to take advantage of the light and shoot up. But that would likely not happen here. Invasive plants or ferns will shade out or inhibit the establishment of native trees, and even if some do manage to sprout into seedlings they will be eaten by deer.

In October 2017, the property owner planted seven native trees in the vicinity of these openings: four hickory, two oak (black oak and swamp white oak), and one tulip poplar. The tulip poplar was transplanted from elsewhere on the property. The others were purchased from Go Native tree nursery in Manheim, PA. One hickory was two feet tall, the others three to four feet. The nursery packed the hickories in special plastic sleeves to preserve the taproot.

“I cleared away a lot of tangled vegetation in a diameter of about three feet from where I would plant each tree,” noted the owner. The swamp white oak was planted near the bottom of the slope; the others on the upland slopes.

“I prepared the holes using a manual post hole digger, digging down three feet. I then dug down another six inches or so, expanded the diameter of the hole, added a couple of shovelfuls of peat moss into the hole. Then, in the hole, I mixed the peat thoroughly with the soil I had removed. I added about a cup of 10-10-10 fertilizer pellets into the hole and continued to mix the peat-soil-fertilizer in the hole.” As the trees are slowing down and preparing for dormancy in the fall, fertilizer helps them store nutrients to be ready for spring.

“I then removed most of the soil mixture and planted the trees, paying particular attention not to plant them too deep—this was made difficult because of the steep hill that this was on.” Then, “on the downhill side of the cleared area of each planting I placed small stones, rocks and small fallen branches in an attempt to minimize any possible erosion.”

The trees were watered thoroughly, and the erosion barriers were adjusted based on observing the water flow from the planting site.

Finally, to protect from deer and rodents, the owner installed three-foot-high wire fencing around each tree in about three feet in diameter—only to discover the following spring that the height was insufficient. “I mulched the area I had cleared around each tree, being careful to keep the mulch away from the trunks.”

Planting is the easy part (not that it’s easy). What is most critical to the success of a woodland planting like this one is the maintenance that follows planting of the young trees. “The first season, fall 2017, was very dry, so I watered the new plantings probably twice a week. I weeded by hand around each tree to keep grass, weeds and moss away.”

“In spring 2018, I put a small amount of 10-10-10 fertilizer into four holes I had dug 18 inches deep and about 18 inches away from the trunk around each tree.” This step gives the trees a nutritional boost as they are entering a critical phase, the first growing season where they must adapt to the soil. The rocky soil in this location benefitted from an extra shot of nutrients. By the next year this extra shot was not necessary.

In 2018 the owner continued to water the trees regularly, though not twice a week. By late spring, it appeared that six of the seven had survived, but a closer inspection in August showed that the seventh tree was just a tad less energetic in putting out new leaves than its fellows, so the untended weeds were obscuring it. “Lesson: don’t give up too soon on new plantings!”

One key change in that first growing season was an increase to the fence height. “The first spring the leaders on all trees were doing very well the first few weeks. Imagine my consternation the morning I discovered that the deer had eaten the leaders off all seven trees. As a result, I replaced my wire fencing with six-foot-high fencing—not particularly pretty, but it works. I installed the high fencing so that I could open one side for weeding.” He increased the diameter as well, to four to six feet depending on the location. All the trees recovered.

While watering is not necessary after the second year, the trees still require regular attention. The owner inspects the trees looking for health or maintenance issues. “There was some fungus or rust damage one year that I had to treat with a commercial spray.”

“The swamp white oak was so profuse with large leaves that the leader was bending substantially and leaning against the wire fencing. I secured three lengths of Velcro loosely around the leader and attached each to the fencing.”

There was a large Norway Maple upland of one of the planting sites which the owner removed in 2020. These non-native invasive trees, planted as shade trees in the landscape, escape into the woods and proliferate. They create dense shade (which is bad for tree regeneration and also for the growth of woodland wildflowers), have minimal wildlife value and are also allelopathic—meaning that they produce chemicals that inhibit the growth of other trees. (So does Black Walnut, but that is a native tree.)

While the owner felled this tree, a low-effort method of killing a Norway Maple is to girdle it. Kevin Fryberger, the Brandywine Conservancy’s Natural Resource Manager explains: “Cut two rings around the tree and remove the bark between the two cuts. This ensures the tree can’t transport anything from root to top (or vice versa). If the cut isn’t complete, or deep enough, the tree can survive for quite some time. It’s important to make sure the cut is deep enough to cut through the cambium layer and completely around the circumference of the tree. The starting point and ending point must match up.”  The dead tree will provide standing habitat until it falls (which you will want to make sure is not on the new trees.)

Other than the inspection and problem-solving, ongoing work now includes only weeding by hand within the fenced planting area. The most prevalent weed on this site is stiltgrass. It is a growth inhibitor, so it needs to be removed, but is easy to pull by hand. While ideally all the stiltgrass in the woods would be removed, that is not feasible.

Other weeds that could be problematic for a tree planting include garlic mustard, and Norway maple seedlings. Vines that could kill a young tree must also be removed; these include Asiatic bittersweet, Japanese honeysuckle, multiflora rose, and mile-a-minute.

It is not necessary to keep the woodland trees mulched to provide nutrients or protect from desiccation.  However, a light layer of mulch can also help keep weeds in check.

All seven planted trees are thriving. The fences remain. At some point they can be removed, but with the deer pressure it is better to keep the fences on at least until the trees lowest leaves are above the fence, to prevent deer rub. At that point it is still a good precaution to put an expandable tree guard around the trunk.

The takeaway from this success story is that with care, attention and proper placement trees can be successfully planted in our woodlands.

This small-scale woodland planting project benefits the woods by diversifying its age composition and eliminating some opportunities for invasive species to expand their presence.

This project is a kind of triage to address, in a hyperlocal way, what is a regionwide crisis of woodlands decline. The more small-scale projects there are, the better the condition our woods are in, the more resilient our ecosystems will be.

However, this project should not be conflated with forest restoration. Restoration of a forest is a larger scale, longer term process that builds resiliency into the forest so that it can provide functionality that the “triaged” woods cannot. A forest is a complex ecosystem; restoration of degraded woods aims to increase complexity that the planting of trees cannot fix.

Restoration of a woods starts years before planting, by assessing the soil and treating it with chemicals to eliminate seedbanks of invasive plants, and to prevent germination. Invasive plants must be removed throughout the woods. Test plots are constructed to assess the viability of a native plant community. If there is not a sufficient seedbank, native wildlflowers, grasses and ferns are planted. Shrubs and understory trees may be absent. If necessary, trees are felled to create canopy openings. The woods must be fenced against deer depredation if the deer cannot be managed to a tolerable population size.

Even small areas can be managed to restore the forest ecosystem, and this can have significant effect, provided there is a commitment to preventing its degradation.